Hurricane Sandy off the Carolinas 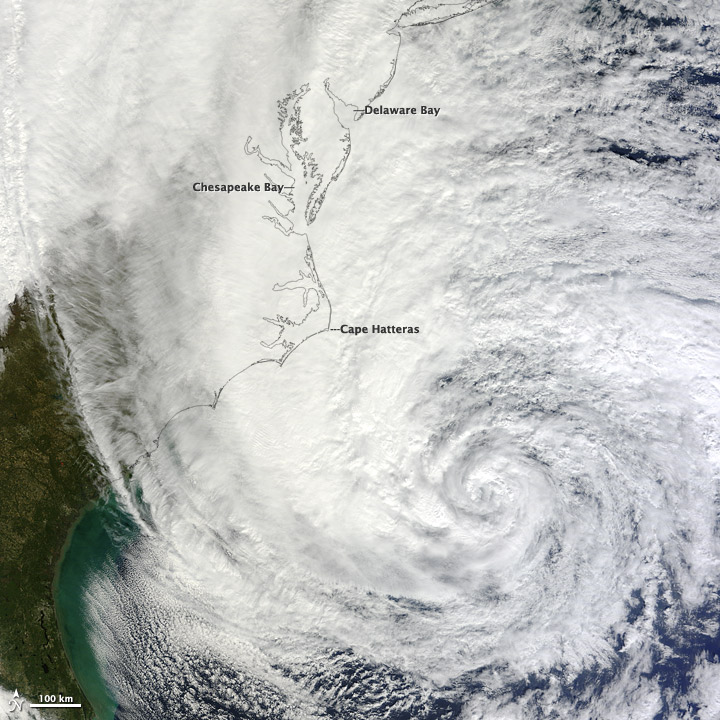 At 11 a.m. local time (one hour before the image was captured), the U.S. National Hurricane Center reported that the storm was located at 32.5° North and 72.6° West, about 250 miles (400 kilometers) southeast of Cape Hatteras, North Carolina, and 575 miles (930 kilometers) south of New York City. Maximum sustained winds were 75 miles (120 kilometers) per hour, and the central pressure was 951 millibars (28.08 inches).

Forecasters predicted that the storm would continue heading north-northeast until the morning of October 29, and then take a hard turn to the northwest into the coastline of Delaware, New Jersey, or New York. The wind field from the storm was said to stretch 500 to 700 miles and was likely to affect an area from South Carolina to Maine, and as far inland as the Great Lakes. Sandy has already caused significant damage in the Bahamas, Cuba, Jamaica, Puerto Rico, the Dominican Republic, and Haiti; at least 65 lives have been lost to the storm.

For more views of the storm, visit our Hurricane Sandy event page and the NASA Hurricane Resource Page. The National Hurricane Center provides the official U.S. storm forecasts and regular updates on conditions on its home page.

As the U.S. East Coast prepared for landfall of the potent storm, Sandy churned up the Atlantic Ocean along the Gulf Stream.

The Length of Hurricane Sandy

The VIIRS instrument on the Suomi NPP satellite captured this afternoon view of the dangerous storm.

Special sensors on the Suomi NPP satellite captured this view of the storm and the East Coast.

NASA’s Aqua satellite acquired this natural-color view of the storm just before it hit New Jersey.