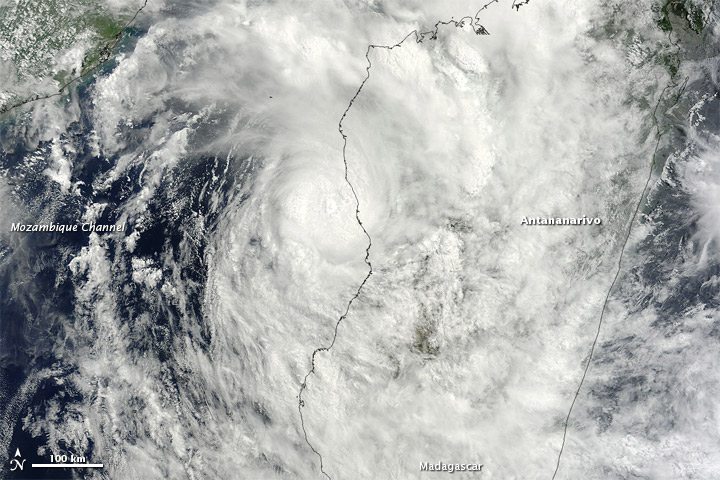 Multiple storms struck the region of Madagascar and the Mozambique Channel in early 2012: Tropical Depression Dando in mid-January, Tropical Cyclone Funso in late January, and Tropical Cyclone Giovanna in mid-February. At the end of February, a fourth storm came to life. Irina started as a tropical storm on February 29. By March 1, the U.S. Navy’s Joint Typhoon Warning Center (JTWC) reported, it was a tropical cyclone. Irina had maximum sustained winds of 55 knots (100 kilometers per hour) with gusts up to 70 knots (130 kilometers per hour).

As of March 1, the JTWC reported, Irina was located roughly 185 nautical miles (345 kilometers) southwest of Antananarivo and was moving southward. The storm was forecast to take a more westward trajectory across the Mozambique Channel over the next couple of days.

Clouds from Tropical Cyclone Irina cover most of Madagascar and part of the Mozambique Channel in this image from March 1, 2012.

Acquired April 5, 2010, this natural-color image shows Tropical Cyclone Robyn spanning hundreds of kilometers over the Southern Indian Ocean. Although the storm lacks a distinct eye, it has a discernible center marked by opaque white clouds.

Giovanna spans hundreds of kilometers in the southern Indian Ocean east of Madagascar on February 10, 2012.