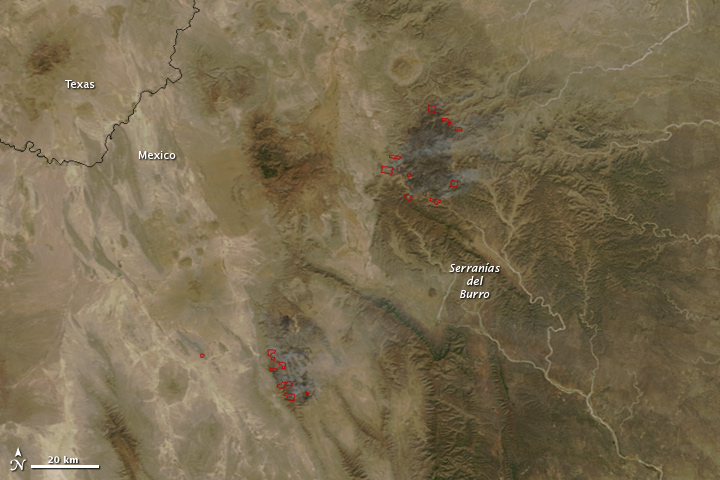 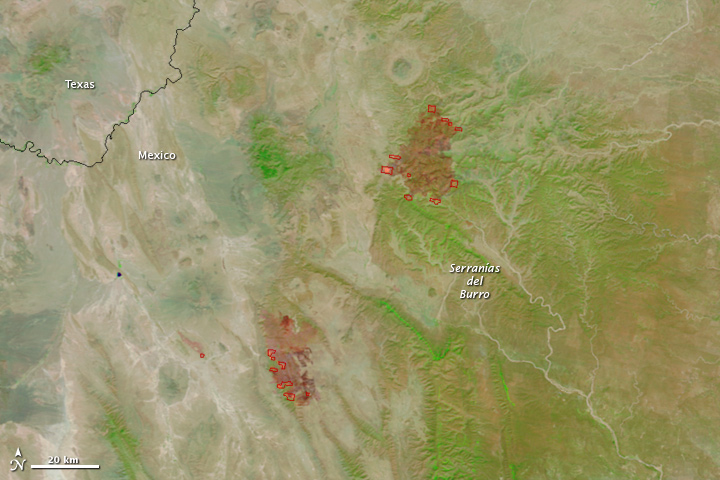 The Moderate Resolution Imaging Spectroradiometer (MODIS) on NASA’s Terra satellite detected two large fires burning in the mountains of northern Mexico on April 3, 2011. Individual hotspots along the fires’ perimeters are outlined in red. The fires are in the Serranías del Burro, a sparsely populated mountain range in the Coahuila State near the Texas border.

The top image shows the fires in photo-like true color. Faint plumes of smoke rise from the fires. The freshly burned land is similar in color to the surrounding desert landscape. This image was taken at 12:25 p.m. local time. As the day progressed, the fires grew more intense, producing thick smoke in a partly cloudy image taken later in the day.

The lower image was made from the same data, but also includes infrared light. In this treatment, newly burned land is brick red. Plant-covered land is green and bare earth is tan. The hot fires glow orange in the infrared light.

The lower image shows that the two fires are large. They had been burning for several days before this image was taken, and a large area of land, covering at least 20 kilometers (12 miles) north to south in each case, had burned.

This image pair shows two large fires burning in the mountains of northern Mexico on April 3, 2011.

Two large fires burned in the mountains of northern Mexico in early April 2011.

Fires in Russia and China near the Amur River

cores of fires were burning along the Russian border with China on May 8, 2006. The fires were sending up brown smoke that is so thick that it entirely masked the land underneath it.