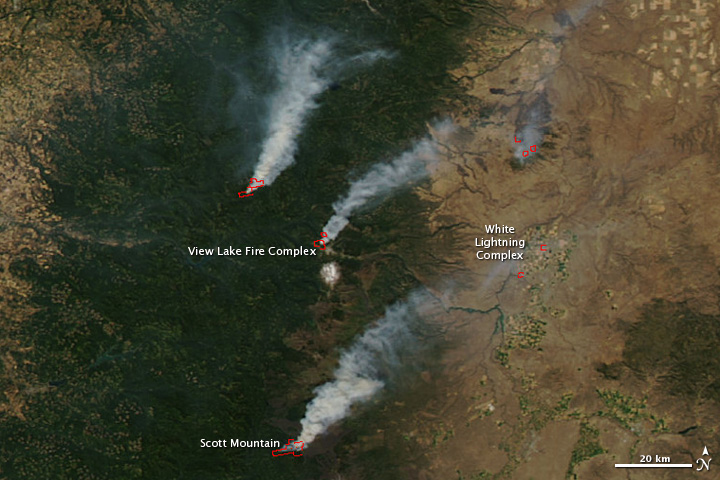 A cloudless summer day afforded the Moderate Resolution Imaging Spectroradiometer (MODIS) on NASA’s Aqua satellite this clear view of fires in central Oregon on August 25, 2010. Three of the fires, the View Lake Fire Complex, the White Lightning Complex, and the Scott Mountain Fire, are large incidents being managed by fire fighters. The remaining two clusters of fires are unnamed fires. All of the fires that MODIS detected are outlined in red.

The remaining fires burn in the forests of the Cascade Mountains. The View Lake Fire Complex and Scott Mountain fires were also ignited by lightning. These fires burned in conifer forests and, as a result, were producing far more smoke. Like the White Lightning Complex, the View Lake Fire Complex consists of several fires and may include the unnamed fire to the north.

Fire managers use MODIS fire detections and images such as this one to get a big-picture view of fires. Twice-daily images of Oregon are available from the MODIS Rapid Response Team.

Thick smoke pours from the fires in the Honey Prairie Complex in this image from June 19, 2011.

Smoke hangs over central Oregon in this image of widespread lightning fires on August 27.

Acquired September 27, 2009, this true-color image shows wildfires continuing to burn in Oregon. Near the fires, smoke heads north-northwest but turns sharply toward the southwest near Eugene, Oregon.