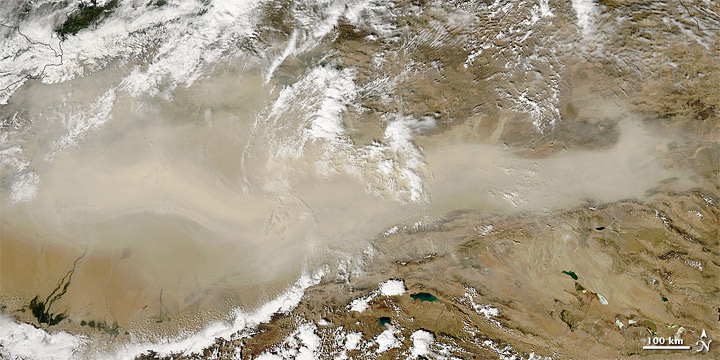 Dust blew eastward out of the Taklimakan Desert on August 26, 2010. The Moderate Resolution Imaging Spectroradiometer (MODIS) on NASA’s Aqua satellite took this picture the same day. The tan-colored dust plume flutters like a giant scarf across hundreds of kilometers of arid landscape. Source points for the plume are not obvious in this image, but the dust likely arose in the desert’s western reaches.

Resting in the Tarim Basin between the Tien Shan Mountains in the north, and Kunlun Mountains in the south, the Taklimakan is the largest desert in China, and the largest shifting-sand desert in the world. Eighty-five percent of the Taklimakan’s land surface consists of crescent-shaped dunes, some reaching a height of 200 meters (650 feet). Lacking drainage, the desert has collected large quantities of salt left behind by evaporating water.

Acquired September 5, 2010, these natural-color images a wide-area and close-up view of a dust storm in the Taklimakan Desert.

Acquired October 22, 2010, this natural-color image shows dust over the eastern half of the Taklimakan Desert.

Dust in the Taklimakan Desert