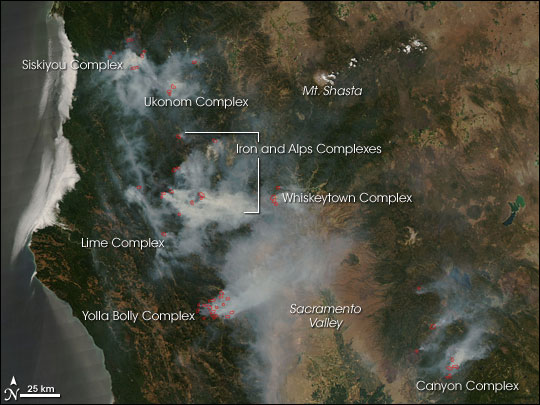 Since the first weekend of summer 2008, California has been plagued by dozens of forest fires that were triggered by “dry” thunderstorms—thunderstorms that produce lightning, gusty winds, but little rain. As of the third week of July, several of the fires were tens of thousands of acres and still only partially contained. This image of Northern California shows the fires on Friday, July 18, 2008. The image was captured by the Moderate Resolution Imaging Spectroradiometer (MODIS) on NASA’s Terra satellite. Places where MODIS detected actively burning fires are outlined in red.

The high-resolution image provided above is at MODIS’ maximum spatial resolution (level of detail) of 250 meters per pixel. The MODIS Rapid Response Team provides twice-daily images of Northern and Southern California in additional resolutions and formats, including an infrared-enhanced version that highlights burned ground.

â€œDryâ€ thunderstorms triggered hundreds of fires in California on the first day of summer 2008. In Northern California, fires continued to burn in August.