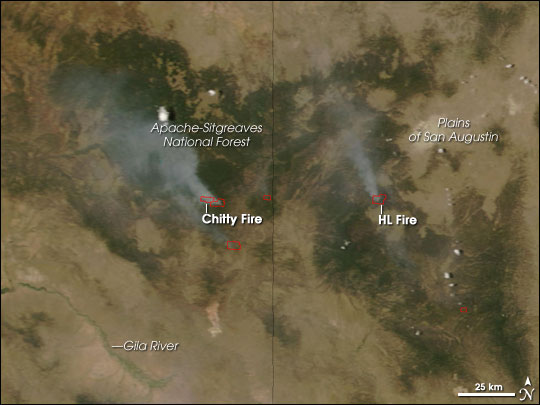 Several large fires were burning in Arizona (left) and New Mexico (right) in the first week of July 2007. This image was captured by the Moderate Resolution Imaging Spectroradiometer (MODIS) on NASA’s Terra satellite on July 4. Places where MODIS detected active fires are outlined in red.

The largest fire in Arizona was the Chitty Fire, which was reportedly 5,700 acres and 25 percent contained as of July 5, according to the morning report from the National Interagency Fire Center on July 5. The largest in New Mexico was the HL fire, which was 10,050 acres. (The HL fire was a “wildland fire use” fire, which means it was being allowed to burn according to a pre-existing natural resource management plan. Containment estimates don not apply to this category of fires.) Both fires were started by lightning, the Chitty Fire on June 29, and the HL Fire on June 21.

The large image provided above has a spatial resolution (level of detail) of 250 meters per pixel. The MODIS Rapid Response Team provides twice-daily images of the region in additional resolutions.

Fires in the U.S. Southwest

Fires in the Southwest

This true-color image shows a large fire burning on the western coast of Scotland.