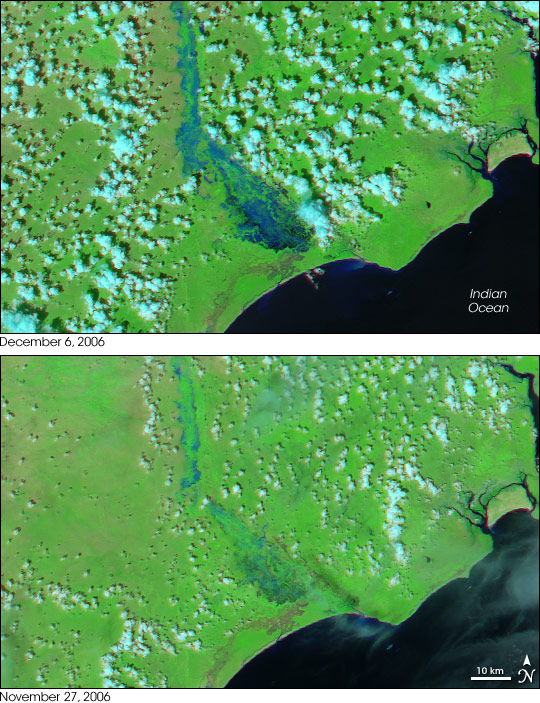 On December 6, 2006, Kenya got a brief respite from the unusually heavy rains that brought deadly floods to the country during November. The break in the clouds afforded the Moderate Resolution Imaging Spectroradiometer (MODIS) on NASA’s Aqua satellite this view of the mouth of the Tana River, one of the most severely flooded regions in Kenya. By this time, floodwater from the upper reaches of the river had drained to the river’s mouth, causing the floods seen here. Scattered clouds, pale blue in the combination of infrared and visible light used to make the image, float over the swollen river and bright green, plant-covered landscape. The lower image, taken a little over a week earlier on November 27, shows the river before the floods reached this particular section. At that time, the central portions of the river were severely flooded.

The floods seen on the Tana River were caused by a combination of torrential rain and a release of water from Kenya’s overwhelmed hydroelectric dams, reported the International Federation of Red Cross and Red Crescent Societies. People in hundreds of communities along the Tana River were displaced when the river burst its banks.

The Tana River was just one of many rivers to burst their banks in East Africa during the short rainy season of 2006. The short rains, which typically run from late October through early December, fell on drought-hardened ground in Ethiopia, Somalia, and Kenya, and gathered into raging floods. As of December 7, the United Nations Office for the Coordination of Humanitarian Affairs estimated that 1.8 million people had been affected by the flooding in the three countries. Not only had the floods directly damaged homes, businesses, public buildings, and agricultural fields, but they cut off roads and contaminated drinking water. The lack of clean water and access to health care, food, and other supplies may lead to a health crisis, warns the World Health Organization. Diseases such as cholera, malaria, diarrhea, and measles have already started to spread among displaced people living in unsanitary conditions with limited access to clean water. Though early December gave the region a break from the rains, more rain and additional flooding were predicted through December. 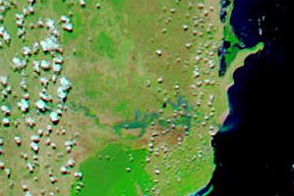