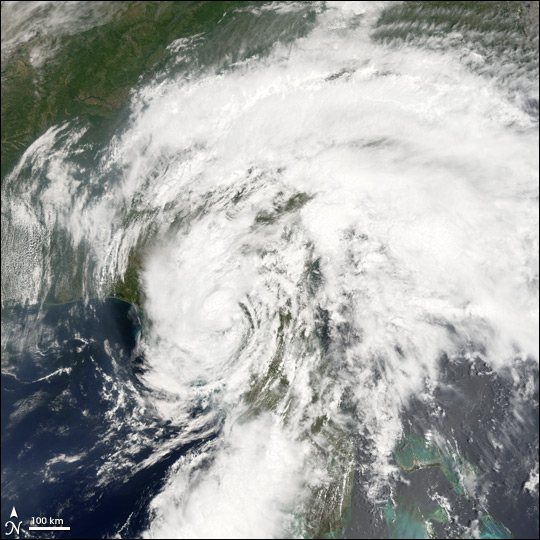 Tropical Storm Alberto formed as a tropical depression early in the morning on June 10, 2006, in the Yucatan Channel. By early morning on June 11, wind strength within the storm crossed the critical threshold of 39 knots (70 kilometers per hour; 45 miles per hour), the minimum wind speed necessary to become classified as a tropical storm and hence earn a name. Thus Alberto became the first named storm of the 2006 Atlantic hurricane season. Alberto briefly flirted with hurricane status as wind speeds came close to the necessary 64 knots (118 km/hr; 74 mph), but the storm never quite reached hurricane strength. As of the morning of June 14, it had come ashore in northern Florida and had been downgraded to a tropical depression.

This photo-like image was acquired by the Moderate Resolution Imaging Spectroradiometer (MODIS) on the Terra satellite on June 13, 2006, at 12:05 p.m. local time (16:05 UTC). The tropical storm at this time had an obvious a spiral structure, but the main mass of clouds was located ahead of the storm to the north and east. The storm was just half an hour from making landfall near Adams Beach, roughly 80 kilometers (50 miles) from Tallahassee.

Sustained winds in the storm system were estimated to be around 80 kilometers per hour (50 miles per hour) around the time the image was captured, according to the University of Hawaii’s Tropical Storm Information Center. Rainfall totals from the storm were predicted to be as high as 20 centimeters (8 inches) in Georgia and the Carolinas. Drought-stricken Florida was looking for rain, but the heavy downpours predicted were also causing concerns about local flooding.

Tropical Storm Alberto formed as a tropical depression early in the morning on June 10, 2006, in the Yucatan Channel.