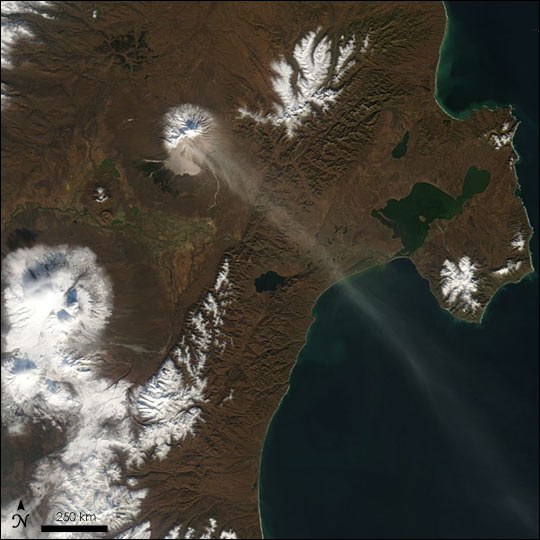 On October 12, 2004, a plume of ash streamed to the southwest from the Sheveluch Volcano on Russia’s Kamchatka Peninsula. The ash could be erupting from the volcano, or it could be old ash, resuspended on the wind, but without ground confirmation, it is impossible to tell. The Moderate Resolution Imaging Spectroradiometer (MODIS) on NASA’s Terra satellite, which acquired this image, did not detect a thermal emission associated with an eruption, but that does not necessarily mean that the volcano is not erupting. On October 8, the Kamchatka Volcanic Eruption Response Team (KVERT), the group responsible for monitoring Sheveluch, placed the volcano at color code level orange, meaning that the volcano is erupting or an eruption may occur at any time. A lava dome had been growing in the volcano’s active crater and several shallow earthquakes, usually associated with rising magma, had been recorded in early October. On October 1, 2, 4, 5, and 6, ash plumes rose from the volcano, and it is likely that the plume observed here is a continuation of that eruption.

Sheveluch is not the only volcano shown in this image. The Klyuchevskoy group of volcanoes form the snow-covered mound southwest of Sheveluch. Klyuchevskoy, the largest of the group—in fact, the largest volcano on the peninsula— has also been active recently. At code yellow (volcano is restless, eruption may occur) on October 8, Klyuchevskoy has produced occasional ash plumes and frequent earthquakes in early October.

The large image provided above has a resolution of 250 meters per pixel. The image is available from the MODIS Rapid Response Team in additional resolutions.

A dark plume of ash streams from the Sheveluch volcano in Kamchatka, Russia, in this MODIS image, captured on October 20, 2004.