Differences from place to place

Phytoplankton thrive along coastlines and continental shelves, along the equator in the Pacific and Atlantic Oceans, and in high-latitude areas. Winds play a strong role in the distribution of phytoplankton because they drive currents that cause deep water, loaded with nutrients, to be pulled up to the surface.

These upwelling zones, including one along the equator maintained by the convergence of the easterly trade winds, and others along the western coasts of several continents, are among the most productive ocean ecosystems. By contrast, phytoplankton are scarce in remote ocean gyres due to nutrient limitations. 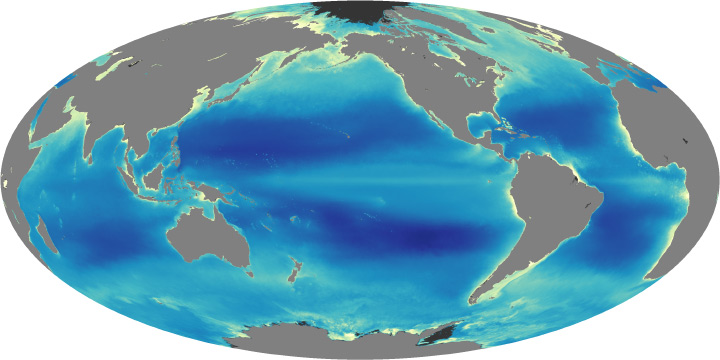 Phytoplankton are most abundant (yellow, high chlorophyll) in high latitudes and in upwelling zones along the equator and near coastlines. They are scarce in remote oceans (dark blue), where nutrient levels are low. This map shows the average chlorophyll concentration in the global oceans from July 2002–May 2010. View animation: small (5 MB) large (18 MB). (NASA image by Jesse Allen & Robert Simmon, based on MODIS data from the GSFC Ocean Color team.)

Differences from season to season

Like plants on land, phytoplankton growth varies seasonally. In high latitudes, blooms peak in the spring and summer, when sunlight increases and the relentless mixing of the water by winter storms subsides. Recent research suggests the vigorous winter mixing sets the stage for explosive spring growth by bringing nutrients up from deeper waters into the sunlit layers at the surface and separating phytoplankton from their zooplankton predators.

In the subtropical oceans, by contrast, phytoplankton populations drop off in summer. As surface waters warm up through the summer, they become very buoyant. With warm, buoyant water on top and cold, dense water below, the water column doesn't mix easily. Phytoplankton use up the nutrients available, and growth falls off until winter storms kick-start mixing.

In lower-latitude areas, including the Arabian Sea and the waters around Indonesia, seasonal blooms are often linked to monsoon-related changes in winds. As the winds reverse direction (offshore versus onshore), they alternately enhance or suppress upwelling, which changes nutrient concentrations. In the equatorial upwelling zone, there is very little seasonal change in phytoplankton productivity.

In spring and summer, phytoplankton bloom at high latitudes and decline in subtropical latitudes. These maps show average chlorophyll concentration in May 2003–2010 (left) and November 2002–2009 (right) in the Pacific Ocean. (NASA images by Jesse Allen & Robert Simmon, based on MODIS data from the GSFC Ocean Color team.)

Differences from year to year

The biggest influence on year-to-year differences in global phytoplankton productivity is the El Niño-Southern Oscillation (ENSO) climate pattern. ENSO cycles are significant changes from typical sea surface temperatures, wind patterns, and rainfall in the Pacific Ocean along the equator.

During EL Niño events, phytoplankton productivity in the equatorial Pacific declines dramatically as the easterly trade winds that normally drive upwelling grow still or even reverse direction. The transition between El Niño and its counterpart, La Niña, is sometimes accompanied by a dramatic surge in phytoplankton productivity as upwelling of nutrient-rich deep water is suddenly renewed.

El Niño events influence weather patterns beyond the Pacific; in the eastern Indian Ocean around Indonesia, for example, phytoplankton productivity increases during El Niño. Productivity in the Gulf of Mexico and the western sub-tropical Atlantic has increased during El Niño events in the past decade, probably because increased rainfall and runoff delivered more nutrients than usual.