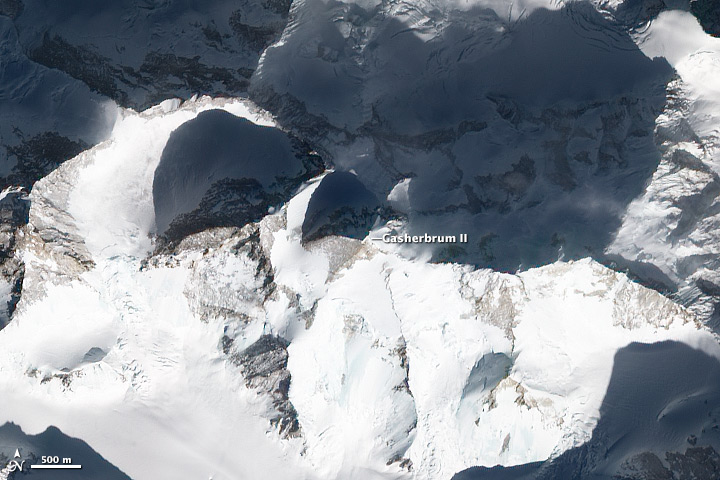 The four Gasherbrum peaks are the highest points along an enormous horseshoe-shaped ridge on the border of Pakistan and China. The ridge encircles South Gasherbrum Glacier, a bowl-shaped mass of ice that flows into Baltoro Glacier, the longest glacier in the Karakoram (62 kilometers, or 39 miles).

An Austrian team was the first to reach Gasherbrum II’s summit, following a route up the south face along the southwest ridge in 1956. The Austrian team pioneered a new approach to climbing. During the ascent, night overtook the climbers at about 7,500 meters (24,600 feet). Rather than turning back to camp, they spent the night huddled near a cliff with no gear other than what they were carrying—a technique known as bivouacking. It was the first time a team deliberately bivouacked the night before attempting to summit an eight-thousander.

Today, Gasherbrum II is considered one of the safest and easiest eight-thousanders to climb. Over the years, climbers have skied, snowboarded, parachuted, and even hang-glided down from the summit. There had been more than 930 successful ascents of Gasherbrum II as of 2012, while only 21 people had died trying—a fatality rate of about 2 percent, the second lowest for the 8,000 meter peaks.