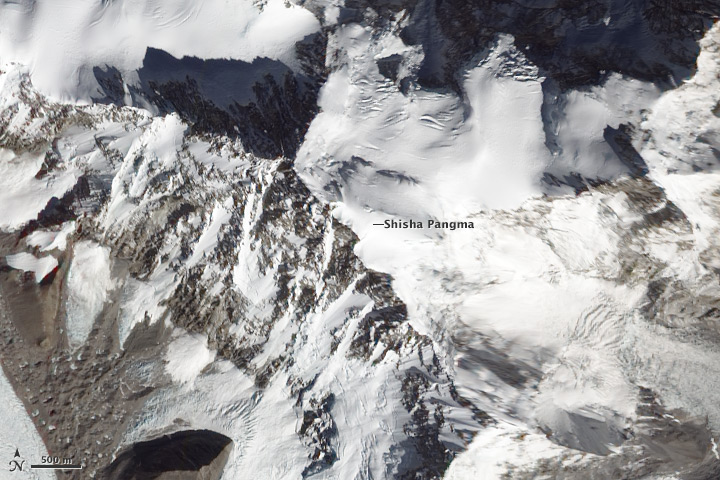 The shortest and youngest of the eight-thousand-meter peaks, Shisha Pangma is the only one located entirely within Tibet. (Of the others, three are entirely in Nepal and one in Pakistan. The rest sit along political borders.)

Though known today as one of easiest to climb, Shisha Pangma was the last eight-thousander summited due to restrictions on foreign travelers. A Chinese team reached the top in 1964, choosing a route that brought climbers up the northwest face along the northeast ridge. In the image above, much of the northwest face is cast in shadow. The steep, craggy south face—much more difficult to climb—rises more than 2,000 meters and has many areas with exposed rock.

According to statistics compiled by Eberhard Jurgalski, co-author of On Top of the World: The New Millennium, there had been 302 successful ascents of Shisha Pangma as of March 2012. Twenty-five people had died trying to climb the mountain—a fatality rate of about 8 percent. Many climbers finish on the Central Summit instead of continuing to the slightly higher Main Summit, which requires about an extra hour of climbing along a narrow ridge. British mountaineer Alex MacIntyre described the view along the ridge: “The ridge grew increasingly narrow and sharp. The north side was powdery and steep, impractical and dangerous to traverse; the south side was steeper, vanishing immediately into a jumble of rock and sugary ice.”