When Fires and Clouds Collide 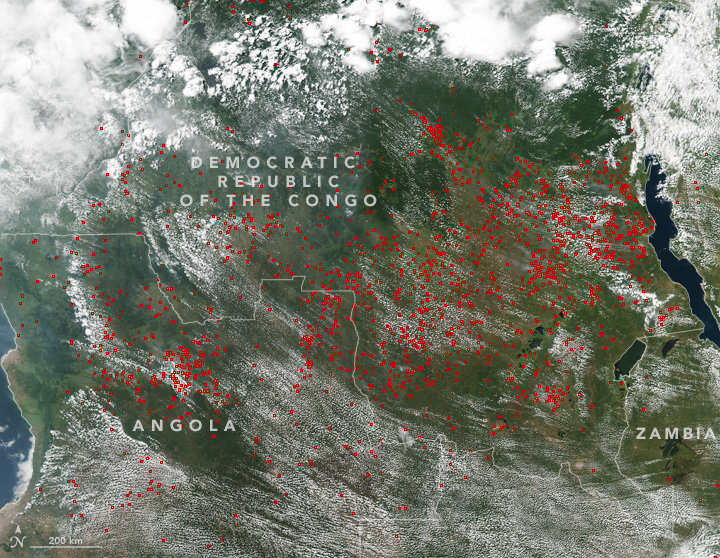 Near the equator, forests function a bit like cloud machines. Trees and plants release moisture into the air through transpiration. As heat from the Sun beats down during the day and warms the surface, this moisture rises in the atmosphere, cools, and condenses into small, puffy cumulus clouds. Sheets of these clouds—sometimes called popcorn clouds—typically spring up in mid-morning over tropical forests. They peak in late-afternoon and fade by the evening, often dropping rain in the process.

When the Visible Infrared Imaging Radiometer Suite (VIIRS) on Suomi NPP captured this image at 1:00 p.m. local time (12:00 Universal Time) on May 21, 2017, aspects of this process were on display over the Democratic Republic of the Congo, Angola, and Zambia. Rows of small cumulus clouds trace the direction of the wind in the bottom fifth of the image. Larger, thicker cumulus clouds line the top of the image. Note, however, that the center is mostly cloud-free. Instead, the sensor detected a large number of small fires, the locations of which are marked with red squares.

The locations of the fires and the clouds is probably not a coincidence. For several years, remote sensing scientists have noticed that aerosol particles in smoke can inhibit the formation of clouds through a process called the semi-direct effect. Dark-colored soot particles hang in smoky air as it rises and absorb incoming sunlight in the morning. This warms the air near the smoke and reduces the upward movement of moisture, which is key to the formation of cumulus clouds.

Charles Ichoku, a scientist at NASA Goddard Space Flight Center, thinks there is even more to the story. “My hypothesis is that smoke not only inhibits cloud formation, but the radiant heat from fires also causes existing clouds to evaporate,” he said. “Fires generate tremendous heat energy, and it is hard to see how all this heat would not have an effect on the clouds directly overhead as it is transferred into the atmosphere.”

Since human-lit fires are widespread in Central Africa, it is possible that these fires may be changing rainfall patterns in the region. Read more about Ichoku’s research in our feature A Tale of Fire and Water.

Smoke and heat from fires may be burning off cloud cover over parts of Africa. 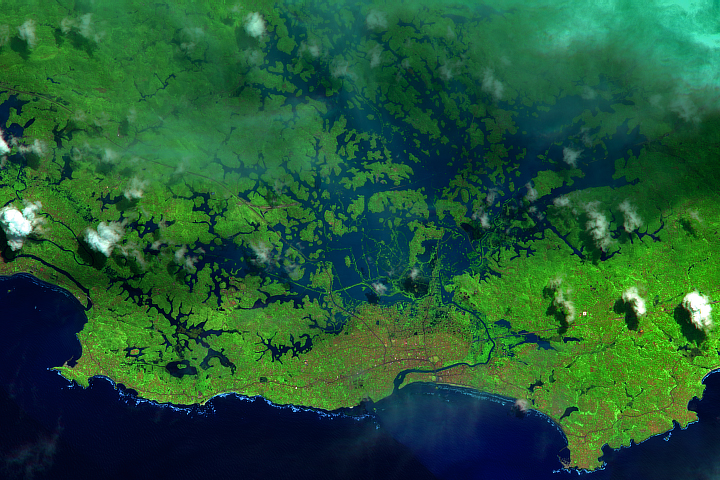 In certain environments, dark particles in smoke from fires can inhibit cloud formation and limit rainfall.