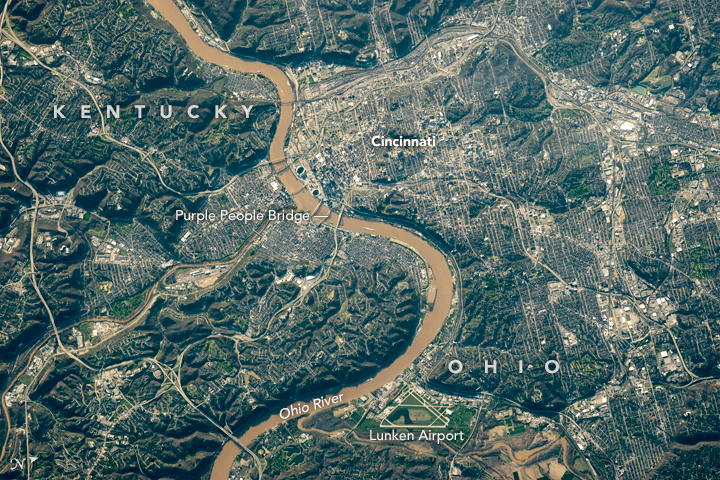 An astronaut on the International Space Station caught this glimpse of the Ohio River, with its sweeping bends and brown color. Cincinnati’s downtown zone—centered on the river bluffs at the point where the Licking River (Kentucky side) meets the Ohio River—is harder to see because cities appear gray and have low-contrast features.

The urban zone straddles two states, spilling into Kentucky as the towns of Covington, Newport, and Bellevue. Green suburbs beyond these downtowns are harder to detect in this early summer shot. Straight lines of the street grid and curved lines in some subdivisions show the extent of the metropolitan area.

Eight bridges carry highway traffic over the Ohio River. For spaceborne observers, near-vertical views like this can make mountains and bridges seem flatter. In this photo, the combination of a powerful lens and a low sun angle reveals the outlines of the bridges in the shadows projected onto the river surface. The Newport Southbank Bridge, popularly known as the Purple People Bridge, is one of the few pedestrian bridges over a river in the United States.

Astronaut photograph ISS043-E-101541 was acquired on April 10, 2015, with a Nikon D4 digital camera using an 800 millimeter lens, and is provided by the ISS Crew Earth Observations Facility and the Earth Science and Remote Sensing Unit, Johnson Space Center. The image was taken by a member of the Expedition 43 crew. The image has been cropped and enhanced to improve contrast, and lens artifacts have been removed. The International Space Station Program supports the laboratory as part of the ISS National Lab to help astronauts take pictures of Earth that will be of the greatest value to scientists and the public, and to make those images freely available on the Internet. Additional images taken by astronauts and cosmonauts can be viewed at the NASA/JSC Gateway to Astronaut Photography of Earth. Caption by M. Justin Wilkinson, Texas State U., Jacobs Contract at NASA-JSC.

Steep bluffs and curving bends give this stretch of the Ohio River a distinctive look. 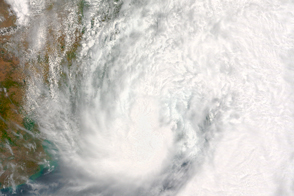 Near the city of Little Rock, the river has meandered for decades, leaving its marks across the landscape.