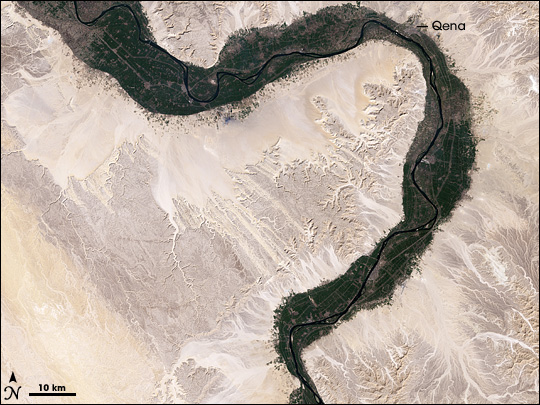 Like a giant green and brown serpent slithering toward the Mediterranean Sea, the Nile River and its corridor of agriculture contrast sharply with the arid beige surroundings of Egypt. Midway between the lush Nile Delta and Lake Nasser, the Nile bends toward the east. Although it follows the general contours of the river, the farmed floodplain takes a smoother path.

The Enhanced Thematic Mapper Plus on NASA’s Landsat-7 satellite captured this image of the bend in the Nile River on October 19, 2000. In this image, the river and its lining of farmland curve to the east and back to the west. The floodplain’s shades of green are somewhat muted in this image, which was acquired outside of peak growing season. Tinges of brown and gray mix with the green vegetation, and signs of urbanization appear in the network of roads surrounding the river, particularly in the east and south. In the northeast, the floodplain stretches out into the city of Qena.

The contrast between the fertile floodplain and the arid landscape farther away from the river is sharp, and this results largely from elevation changes. The floodplain rests inside the floor of a large meandering valley. Valley walls, or wadis, surround the corridor of agriculture, leading up to arid highlands. In some cases, the vegetation corridor narrows so much that it nearly retreats to the river itself, and this situation appears both near the top and bottom of this image. Occasional cliffs line the river valley, and that could explain the narrow vegetation corridor. Near the top of the image, along the southern face of the river valley, tiny ghostlike patches of dark green reach out into the arid landscape—extensions of irrigated agriculture into the arid surroundings.

The region’s harsh, arid climate tethers human civilization to the river. The intimate relationship between people and the landscape is visible day and night. During the day, the river and vegetation stand out from their surroundings, while at night, urban lights outline the Bend in the Nile.

Lights along the Nile

City lights define the Nile River Valley as it snakes across the Egyptian desert. The cities of Naj’ Hamadi, Qena, and Luxor, shine the brightest. Communities in the hillsides create a thin border along either side of the valley. Simliar strips line the Nile itself. Most of Egypt’s population, and most of the country’s arable land, occupies the Nile River Valley.