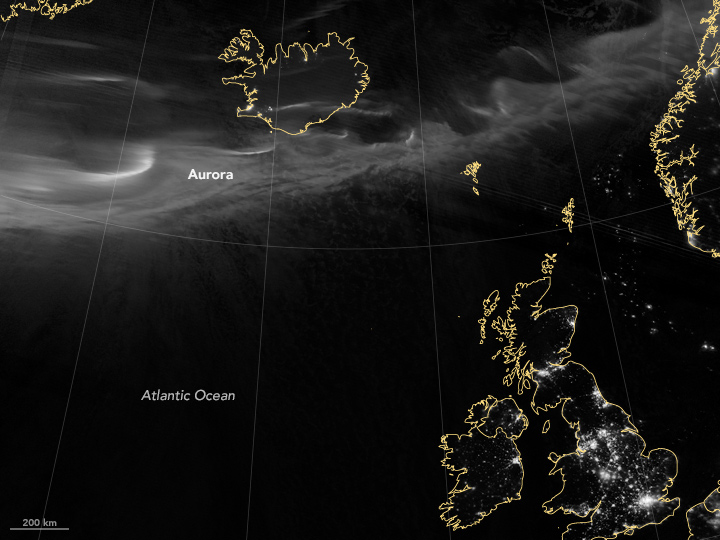 On March 6, 2016, news and social media was buzzing with spectacular photographs of the northern lights (aurora borealis) painting skies across the United Kingdom with brilliant shades of green and pink.

The event was impressive from above as well. Using the day-night band (DNB) of the Visible Infrared Imaging Radiometer Suite (VIIRS), the Suomi NPP satellite acquired this view of the aurora borealis on March 7, 2016. Auroras appear as white streaks over Iceland, the North Atlantic, and Norway. The DNB sensor detects dim light signals such as airglow, gas flares, city lights, and reflected moonlight. In the image above, the sensor detected the visible light emissions that occur when energetic particles rain down from Earth’s magnetosphere into the gases of the upper atmosphere.

It is not often that the northern lights are visible south of Scotland and Northern Ireland, but a geomagnetic storm colored night skies over a much wider swath of the country. The storm reached a G3 or “severe” level on NOAA’s geomagnetic storm scale, according to the Space Weather Prediction Center. On March 7, the Kp index—a metric for global geomagnetic storm activity—rose as high as 7 on a scale that goes to 9.

The brilliant colors of the aurora are provoked by activity the Sun: Solar energy and particles speed toward Earth in a steady stream called the solar wind, or they rush out in massive eruptions known as coronal mass ejections. (CMEs). These storms from the Sun disturb geospace (the space around Earth) and energize particles already trapped in the magentosphere and radiation belts. Electrons then race down Earth’s magnetic field lines and crash into the gases at high altitudes of the atmosphere. Oxygen gives off a green color when excited; nitrogen produces blue or red colors.

NASA Earth Observatory image by Jesse Allen, using VIIRS day-night band data from the Suomi National Polar-orbiting Partnership. Suomi NPP is the result of a partnership between NASA, the National Oceanic and Atmospheric Administration, and the Department of Defense. Caption by Adam Voiland.

A sensor on the Suomi NPP satellite designed to detect faint light observed the aurora over northern Europe.

An unexpected aurora colored the skies of Canada and northern U.S. states.