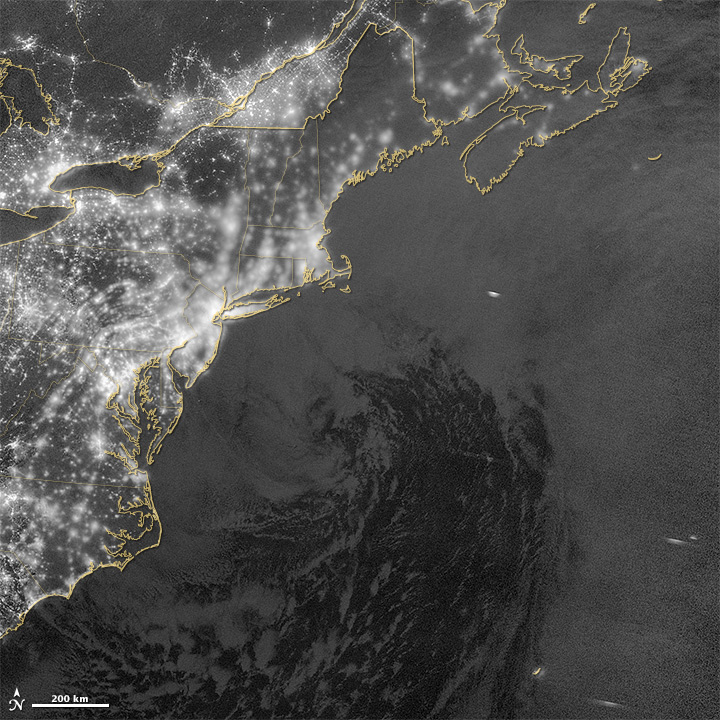 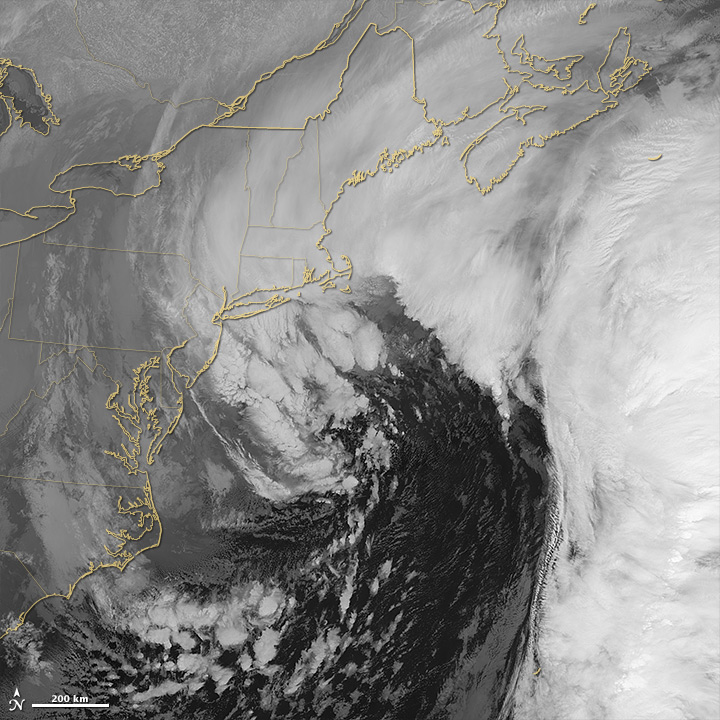 The U.S. National Weather Service called it a “a crippling and historic winter blizzard.” In late January 2015, transportation systems from Trenton to Portland were shut down, and more than 35 million people hunkered down for extreme snowfall and biting winds. For those in New England, it turned out to be a monstrous storm. For the Mid-Atlantic region, not so much.

Vast swaths of Massachusetts, Connecticut, Rhode Island, New Hampshire, Maine, and Long Island (NY) were blanketed with 15 to 25 inches (40 to 60 centimeters) of snow as of midday on January 27, 2015, and snow was expected to continue into January 28. Sustained winds reached gale force, with hurricane-force gusts along the coastlines. Storm surges sent ice and water into the streets of Scituate and Nantucket, Massachusetts. Many New England towns, including the city of Boston, were expected to approach all-time snowfall records.

The Visible Infrared Imaging Radiometer Suite on the Suomi NPP satellite acquired these nighttime images at 1:45 am US eastern standard time (06:45 Universal Time) on January 27, 2015. The top image, lit by moonlight and city lights, shows a nor'easter off the coast of the East Coast of the United States. City lights are blurred somewhat by the cloud cover. The second image shows the same scene in longwave infrared radiation, with brighter shades representing the colder temperatures of snow-producing clouds.

The map below shows the same storm as observed around the same time by microwave imagers on Global Precipitation Mission (GPM) satellite and the Advanced Microwave Scanning Radiometer 2 (AMSR2) onboard the GCOM-W satellite. GPM captured the right and left edges of the storm, while AMSR2 captured the middle section of data. These microwave imagers see through the tops of clouds to observe how much and where precipitation occurs. Note that because of the microwave channels used in this image, details of the storm are easier to see over the ocean. 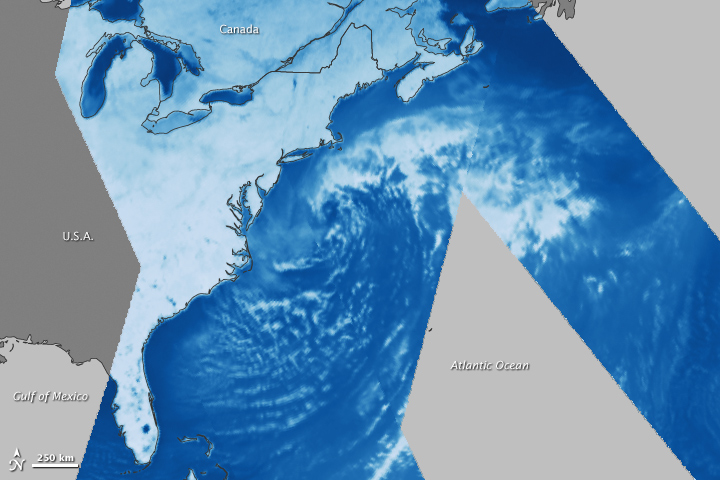 State and city governments in Massachusetts, New York, Connecticut, Rhode Island, and New Jersey took the unusual step of banning travel on all major roadways during the storm. Most of those bans were lifted by midday on January 27, though Massachusetts and Rhode Island extended it later. Thousands of airline flights were canceled, and train service was halted in the Northeast Corridor.

While the forecasts were quite good for New England, the New York-to-Delaware corridor saw far less snow because the storm tracked farther offshore than predicted. Commenting on how the media and the meteorological community handled the event, Marshall Shepherd of the University of Georgia noted:

The models were always more certain that Long Island, Boston, and other parts of the Northeast would be the bullseye. And they currently are...The models were always iffy on the NY/NJ region...There is more risk and nuance in weather forecasts than the public is interested in consuming, so it is a challenge to craft a message that gets attention and is not hype, yet has actionable information. We must continue to have the discussion about how to communicate uncertainty and risk effectively...A historic storm did happen, it just didn't hit NYC hard.

NASA Earth Observatory image by Jesse Allen, using VIIRS data from the Suomi National Polar-orbiting Partnership. Suomi NPP is the result of a partnership between NASA, the National Oceanic and Atmospheric Administration, and the Department of Defense. Caption by Michael Carlowicz.

Blizzard conditions dropped several feet of snow and brought hurricane-force wind gusts to much of the Northeastern United States. The Mid-Atlantic, however, saw less snow than forecast.

Blizzard conditions dropped several feet of snow and brought hurricane-force wind gusts to much of the Northeastern United States. The Mid-Atlantic, however, saw much less snow than forecast. 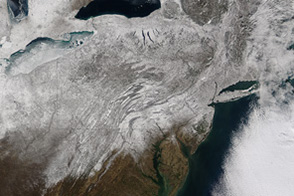 A Blizzard by Moonlight

The Suomi NPP satellite captured this nighttime view of a major storm system as it started dumping heavy snow on the eastern United States.

Another Blizzard Piles Up the Snow in New England

The snowpack near Boston is greater than in all but two reported locations in Alaska.

Snow across the Northeastern United States

Acquired February 9, 2013, this image shows a blanket of snow left by a nor’easter.