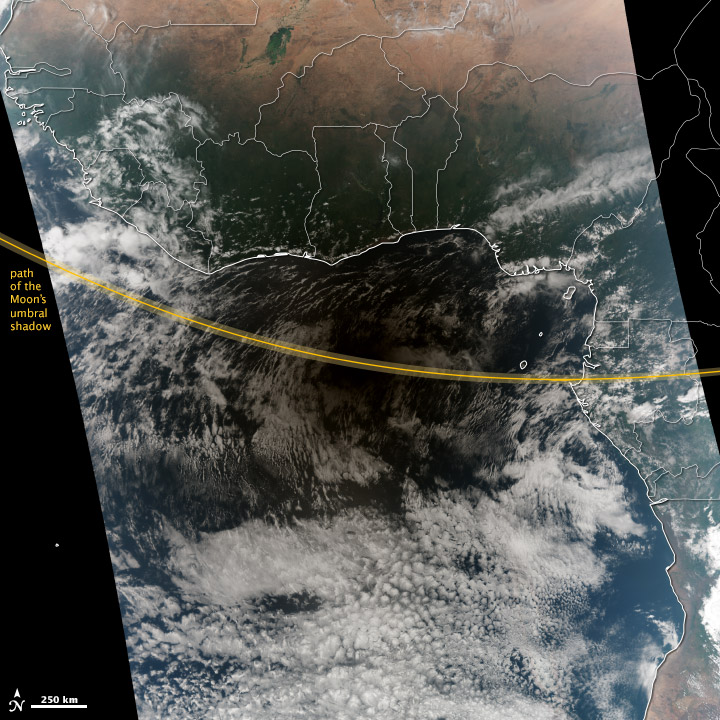 The last eclipse of 2013 was an unusual one. Known as a hybrid eclipse, the Moon blocked just part of the Sun—an annular eclipse—at sunrise in the western Atlantic Ocean, and then moved into total eclipse along a long, narrow path crossing into central Africa. For a little more than three hours, the shadow of the Moon traced a path about 13,600 kilometers (8,500 miles) long but no more than 58 kilometers (36 miles) wide.

This image above shows one orbital swath from the Visible Infrared Imaging Radiometer Suite (VIIRS) on the Suomi National Polar-orbiting Partnership (Suomi NPP) satellite. The yellow line shows the path of the total eclipse, while the map provides context for the location relative to central Africa. VIIRS captured this image at 13:25 Universal Time (1:25 p.m. local time) on November 3, 2013, about 38 minutes after the maximum eclipse.

The darkened area is a combination of the umbra (full) and antumbra (partial) shadow of the Moon on Earth’s surface. Skywatchers within the umbra observed a total eclipse that lasted as long as 99 seconds at maximum eclipse, which occurred at 12:47 Universal Time.

Fred Espenak, an eclipse expert at NASA’s Goddard Space Flight Center, described the blend of a partial and total eclipse. “The duality comes about when the vertex of the Moon's umbral shadow pierces Earth’s surface at some locations, but falls short of the planet along other sections of the path. The unusual geometry is due to the curvature of Earth’s surface that brings some geographic locations into the umbra while other positions are more distant and enter the antumbral rather than umbral shadow.”

The 2013 event was even more unusual because the eclipse shifted from partial to annular to total and then ended. Hybrid eclipses typically start as annular, become total, and then finish as annular. The last hybrid eclipse occurred on November 20, 1854, and the next one will not occur until October 17, 2172, according to Sky & Telescope magazine. Click here for a map of the eclipse path.

NASA Earth Observatory image by Robert Simmon and Jesse Allen, using VIIRS data from the Suomi National Polar-orbiting Partnership. Suomi NPP is the result of a partnership between NASA, the National Oceanic and Atmospheric Administration, and the Department of Defense. Lunar path data from the NASA Eclipse Web Site. Caption by Mike Carlowicz.

This rare event merged annular and total eclipses. It won't happen again until 2172.

Annular Eclipse over the Pacific Ocean

Acquired during the solar eclipse of May 20, 2012, this natural-color image shows the Moon’s shadow over the northern Pacific Ocean.

On February 20, 2008, sky gazers from the central Pacific to Africa saw the full Moon turn a striking red as it passed into Earth’s shadow. From space, the lunar eclipse deepened the darkness of the night. The Defense Meteorological Satellite Program’s (DMSP) F16 satellite captured this view of the eclipse as the satellite flew over the nighttime side of the Earth in a series of overpasses.

Acquired January 15, 2010, this true-color image shows India and the Bay of Bengal, both darkened by an annular eclipse. A white line marks the Indian coastline.