Tracking Dust Across the Atlantic 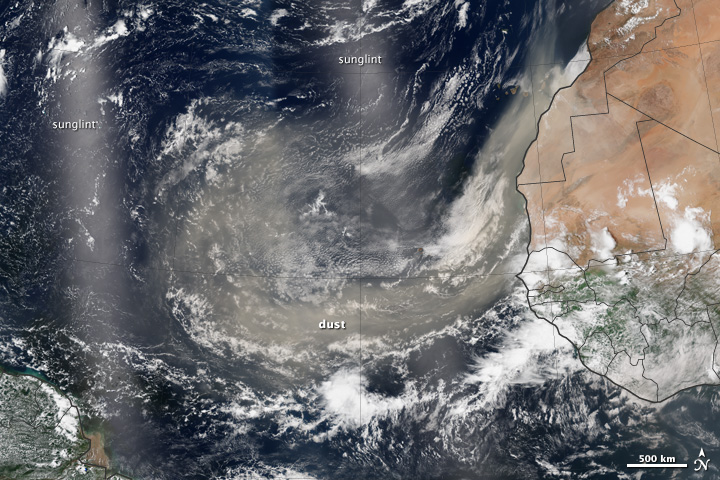 Hundreds of millions of tons of dust are picked up from the deserts of Africa and blown across the Atlantic Ocean each year. That dust helps build beaches in the Caribbean and fertilizes soils in the Amazon. It affects air quality in North and South America. And some say dust storms might play a role in the suppression of hurricanes and the decline of coral reefs. 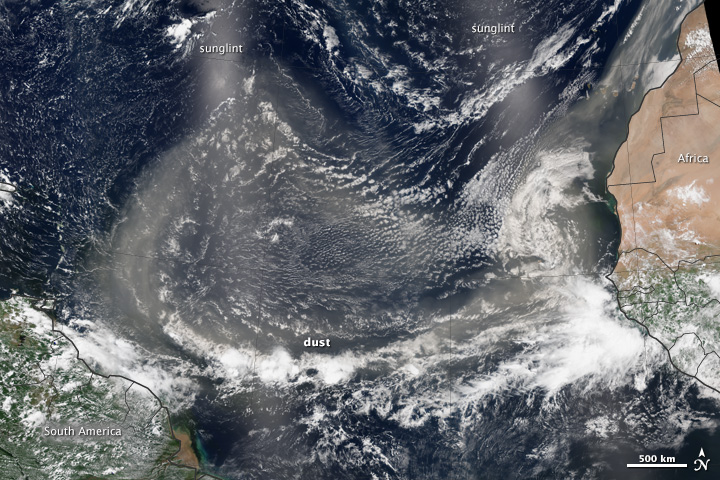 To get a sense of the scale of these storms, you need to get into space and you need more than one orbit. The natural-color images above and below were captured by the Visible Infrared Imaging Radiometer Suite (VIIRS) on the Suomi National Polar-orbiting Partnership (Suomi NPP) satellite on July 31 and August 1–2, 2013. As the spacecraft orbits 824 kilometers (512 miles) above the Earth from pole to pole, it observes swaths that are roughly 3,000 kilometers (1,800 miles) across. Each image is a composite of three adjacent satellite passes.

Dust from the Sahara Desert and other points in interior Africa were lofted into the sky in late July 2013, and the images above show the general westerly and northwesterly progression of the airborne particles across the Atlantic Ocean. (Note that the milky lines running vertically across each image are caused by sunglint, the reflection of sunlight off the ocean directly back at the sensor.) The images help reveal wind patterns (such as trade winds) that steer plumes and clouds. At several points, dust stretched continuously from North Africa to South America. 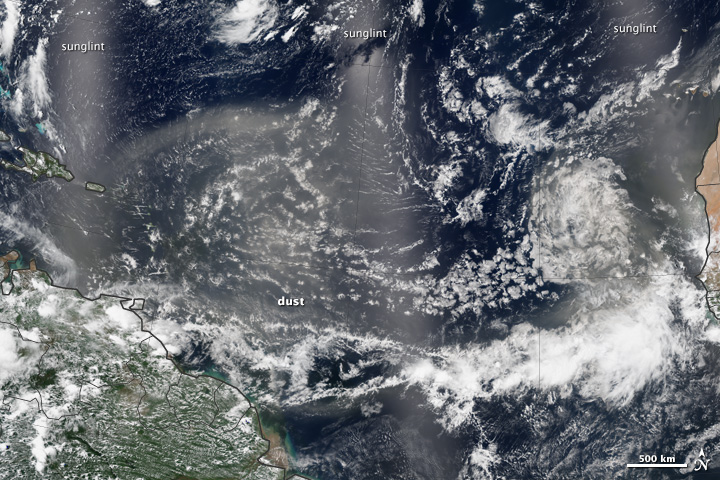 “These mosaics show where the dust goes, which tells us what governs the movement and where they end up,” said Ralph Kahn, a NASA atmospheric scientist who specializes in aerosols. “When satellites first began imaging Earth, it was shocking to see the degree to which airborne particles are carried across continents and oceans. This motivated work in atmospheric ‘teleconnections’ in general, and aerosol transport in particular.”

The dust also was detected by the Ozone Mapping Profiling Suite (OMPS) on Suomi NPP. The maps below show the relative concentrations of aerosol particles on July 31 and August 1-2. While designed to measure ozone in the atmosphere, OMPS gathers ultraviolet spectral information that reveals the presence of smoke and airborne dust. Lower concentrations appear in yellow, and greater concentrations appear in orange-brown. Each map includes roughly six satellite passes. (Note: sunglint also causes some vertical banding in these images.) 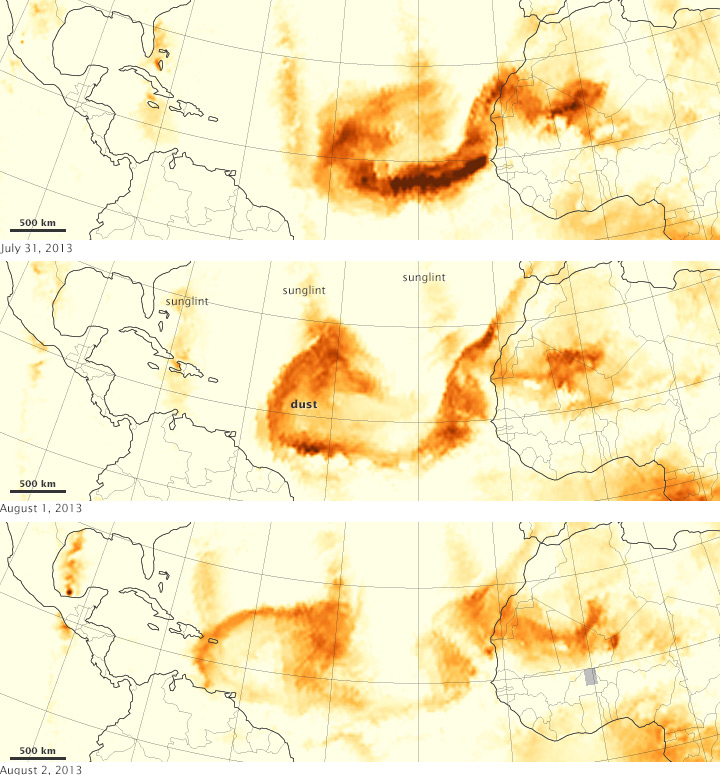 You can watch an animated gif of dust progression by clicking here. A joint French-American satellite, CALIPSO, also captured a vertical profile of the dust plume over the Leeward Islands, which you can see here.

Since late July, some meteorologists have speculated that a particularly dry and dusty Saharan Air Layer was suppressing hurricane formation in the North Atlantic. As of August 27, 2013, no tropical storms had reached hurricane strength yet in the Atlantic Ocean, an unusual but not unprecedented season.

On short-term scales, dry air masses from Africa can sap the moisture-collecting energy of storm systems over the ocean. On the longer scale (years or longer), more dust can mean fewer storms because it blocks incoming sunlight, leading to cooler ocean temperatures. Deciphering the effect of Saharan air and dust is one of the research goals of NASA’s Hurricane and Severe Storm Sentinel (HS3) airborne field campaign this year.

This final view (below) of the dust storm is a composite of VIIRS images from August 1, 2013. The hemispherical projection was created from seven orbits of Suomi NPP. 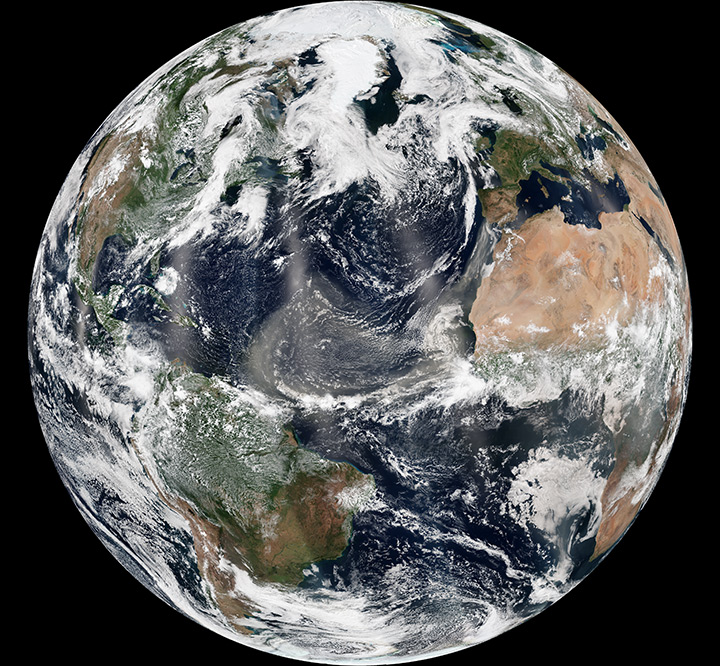 “Dust has long blown across the Atlantic from Africa, but only during the past several decades of satellite observations have we begun to appreciate the vast scale of these events,” wrote Norman Kuring, a member of the ocean color group at NASA Goddard. “Estimates of the dust transported run to hundreds of millions of tons per year, yet we still know relatively little about the effects on phytoplankton productivity, climate, and human health.”

Here are some more satellite images of Saharan dust in the summer of 2013:

NASA Earth Observatory image by Jesse Allen and Robert Simmon, using VIIRS data from the Suomi National Polar-orbiting Partnership and OMPS data provided courtesy of Colin Seftor (SSAI). Suomi NPP is the result of a partnership between NASA, the National Oceanic and Atmospheric Administration, and the Department of Defense. Caption by Mike Carlowicz, with interpretation from Colin Seftor, Scott Braun, and Ralph Kahn from NASA’s Goddard Space Flight Center and Steve Miller of Colorado State University.

Satellite observations show how far winds normally spread North African dust particles before rain and gravity pull them down to the ocean.