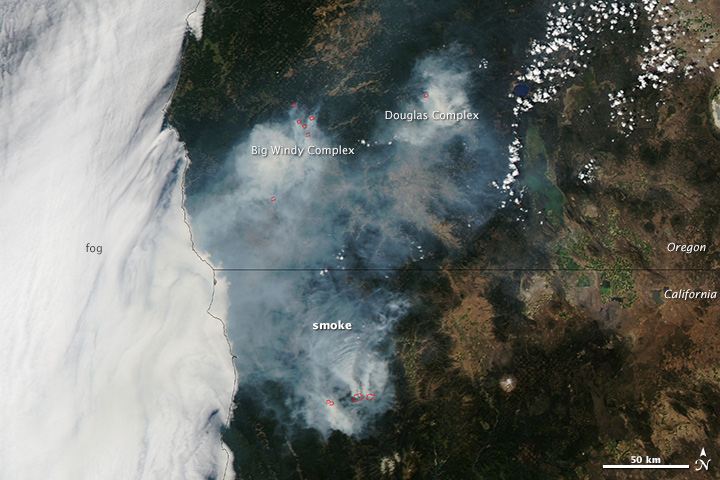 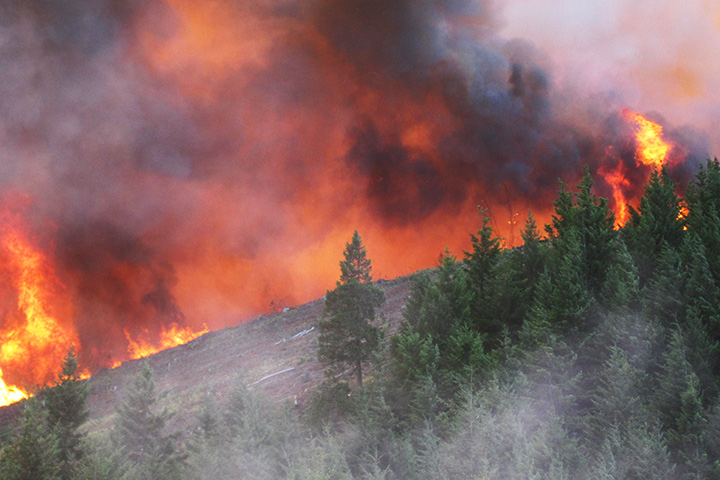 On July 26, 2013, thunderstorms passed over southern Oregon, and lightning ignited dozens of difficult-to-control wildfires. Persistently dry weather since the beginning of 2013 had primed forests to burn, and nearly all of southern Oregon was in a state of severe or moderate drought. In early August, forecasters were expecting the situation to worsen.

On August 5, 2013, the Moderate Resolution Imaging Spectroradiometer (MODIS) on Aqua captured the top image, which shows smoke rising from the Douglas Complex fire and the Big Windy Complex fire in southern Oregon. To the south, the Salmon River Complex fire and Orleans Complex fire burned in northern California. Red outlines indicate hot spots where MODIS detected unusually warm surface temperatures associated with fire. The bottom image, a photograph taken by Marvin Vetter of the Oregon Department of Forestry, shows a burning front within one of the Douglas Complex fires on July 26, 2013.

The Douglas Complex, which initially consisted of more than 54 separate fires, was burning northwest of Grant’s Pass, through forests managed by the Douglas Forest Protection Association. To the west, the Big Windy Complex fires burned in forests managed by the Oregon Department of Forestry. The fires in northern California, likely caused by human activity, burned in Klamath National Forest.

The fires were situated in extremely rugged terrain that hampered firefighting efforts. Approximately 3,000 firefighters were battling the Douglas Complex fires, including the National Guard. About 1,000 were fighting the Big Windy fires. The Douglas Complex was 16 percent contained as of August 6, 2013. Collectively, the two fires had burned nearly 50,000 acres (20,200 hectares).

While the fires have not yet destroyed homes, they have forced evacuations and the closure of some roads. Smoke lingered in the valleys, posing a health risk to people. To counter the smoke, the Red Cross distributed 20,000 respiration masks in southern Oregon. 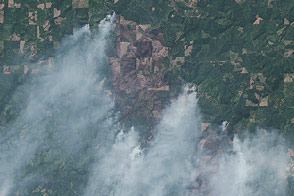 Fires in Oregon and Northern California

A pair of fires in Oregon grew more than 9,000 combined acres between September 18 and 19, 2008, according to the National Interagency Fire Center on September 19. The Lonesome Fire was the larger of the two, at an estimated 15,500 acres; the Rattle Complex was only slightly smaller, at 14,227 acres.

Wildfires and Smoke in Oregon

More than a dozen wildfires and wildfire complexes are contributing to the blanket of smoke over Oregon.

Fires in the Western U.S.