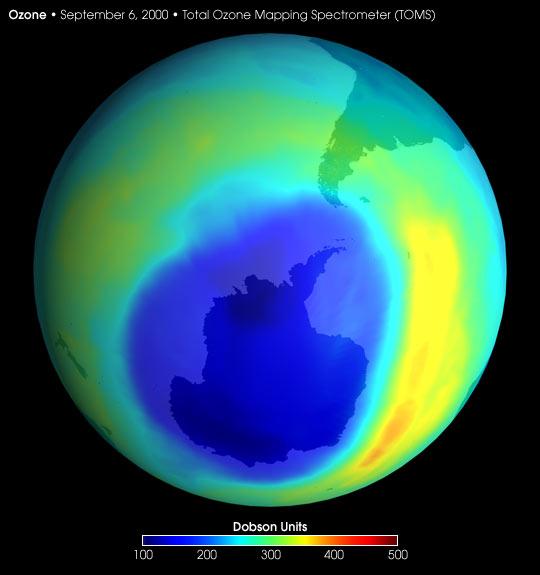 A NASA instrument has detected an Antarctic ozone "hole" (what scientists call an "ozone depletion area") that is three times larger than the entire land mass of the United States—the largest such area ever observed.

The ozone hole's size currently has stabilized, but the low levels in its interior continue to fall. The lowest readings in the ozone hole are typically observed in late September or early October each year.

"These observations reinforce concerns about the frailty of Earth's ozone layer. Although production of ozone-destroying gases has been curtailed under international agreements, concentrations of the gases in the stratosphere are only now reaching their peak. Due to their long persistence in the atmosphere, it will be many decades before the ozone hole is no longer an annual occurrence," said Dr. Michael J. Kurylo, manager of the Upper Atmosphere Research Program, NASA Headquarters, Washington, DC.

Ozone molecules, made up of three atoms of oxygen, comprise a thin layer of the atmosphere that absorbs harmful ultraviolet radiation from the Sun. Most atmospheric ozone is found between approximately six miles (9.5 km) and 18 miles (29 km) above the Earth's surface.

Scientists continuing to investigate this enormous hole are somewhat surprised by its size. The reasons behind the dimensions involve both early-spring conditions, and an extremely intense Antarctic vortex. The Antarctic vortex is an upper-altitude stratospheric air current that sweeps around the Antarctic continent, confining the Antarctic ozone hole.

"Variations in the size of the ozone hole and of ozone depletion accompanying it from one year to the next are not unexpected," said Dr. Jack Kaye, Office of Earth Sciences Research Director, NASA Headquarters. "At this point we can only wait to see how the ozone hole will evolve in the coming few months and see how the year's hole compares in all respects to those of previous years."

"Discoveries like these demonstrate the value of our long-term commitment to providing key observations to the scientific community," said Dr. Ghassem Asrar, Associate Administrator for NASA's Office of Earth Sciences at Headquarters. "We will soon launch QuickTOMS and Aura, two spacecraft that will continue to gather these important data."

The measurements released today were obtained using the Total Ozone Mapping Spectrometer (TOMS) instrument aboard NASA's Earth Probe (TOMS-EP) satellite. NASA instruments have been measuring Antarctic ozone levels since the early 1970s. Since the discovery of the ozone "hole" in 1985, TOMS has been a key instrument for monitoring ozone levels over the Earth.

TOMS ozone data and more pictures are available at:

For more information about ozone and ozone loss, visit: Ozone in the Stratosphere.