Smoke Spreading from Greece to Africa 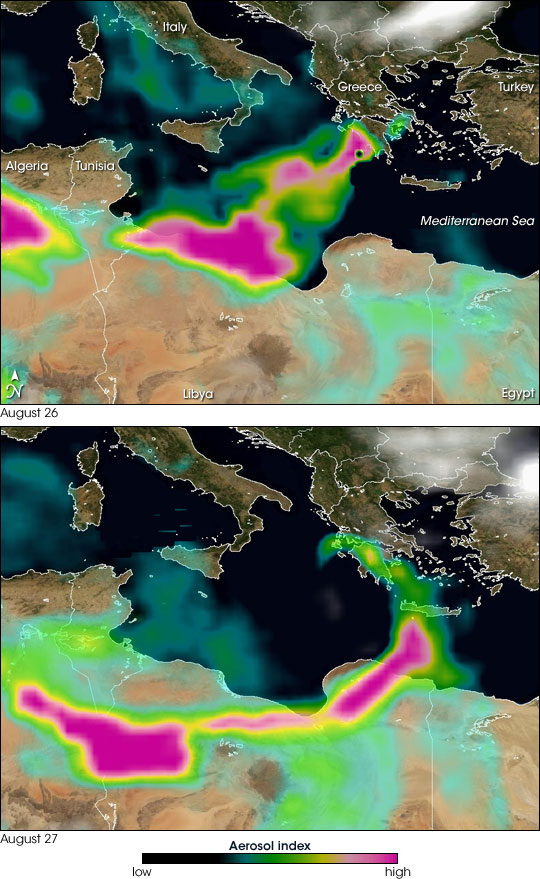 Besides laying waste to huge areas of forest, fires burning in Greece in August 2007 released pollutants that traveled across the Mediterranean Sea and into Africa. This image shows aerosols—tiny solid or liquid particles suspended in air—observed by the Ozone Monitoring Instrument (OMI) on NASA’s Aura satellite layered on the photo-like Blue Marble composite image. Relatively clear air is transparent. Highest aerosol concentrations are pink.

On August 26, 2007, aerosols from the fires on the southwestern coast of Greece took a fairly direct route across the Mediterranean Sea to the western part of the Libyan coast. A large pool of smoke collected over the Gulf of Sirte, off the Libyan coast. Another pocket of thick aerosols appears over Algeria. These particles are probably smoke emitted from fires burning in Algeria over a long stretch of the coastal Atlas Mountains. Farther south over the deserts of northern Africa, the light green areas of moderate aerosol amounts could be smoke or dust.

On August 27, 2007, aerosols still crossed the Mediterranean Sea, but they took a more circular route. They spread southward in a clockwise direction from Greece, across the island of Crete, and concentrated thickly over eastern Libya. The other large pocket of aerosols—the pink patch hovering over the border of Libya and Algeria—may include smoke from Algeria and Greece. As on the previous day, some aerosols collected over Egypt and eastern Libya.

Besides laying waste to huge areas of forest, fires burning in Greece in August 2007 released pollutants that traveled across the Mediterranean Sea and into Africa.

Smoke from Fires in Greece

Smoke from deadly fires in Greece blows across the Mediterranean Sea and pools over the Gulf of Sirte.

Smoke from the recent outbreak of fires in Southern California can clearly be seen from NASA satellites.

Numerous raging wildfires and possible dust events spread a pall of smoke over much of the western and midwestern United States.

Image of the Day Atmosphere Dust and Haze Fires