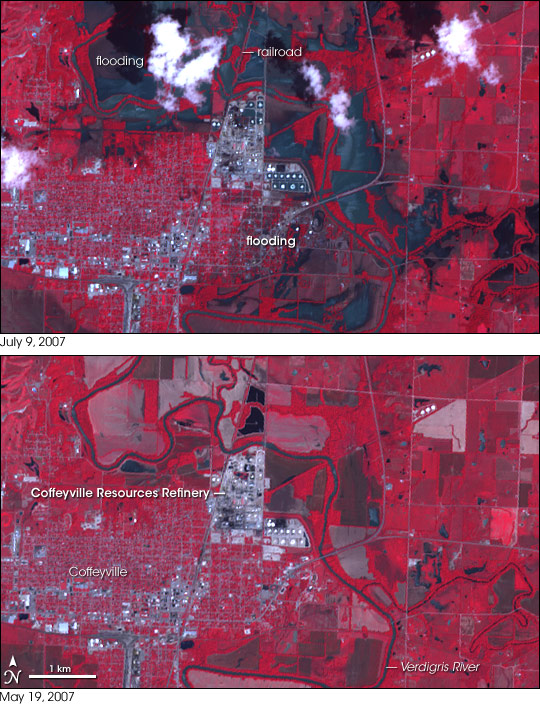 Floods that started with heavy rain on June 26, 2007, still surrounded parts of Coffeyville, Kansas, on July 9, when the Advanced Spaceborne Thermal Emission and Reflection Radiometer (ASTER) flying on NASA’s Terra satellite captured the top image. Coffeyville was flooded on July 1, when the swollen Verdigris River burst through a levee. Water swamped neighborhoods and businesses, including the Coffeyville Resources Refinery. Though the refinery had been shut down in anticipation of the flooding, it leaked more than 42,000 gallons of crude oil into the Verdigris River, reported the Environment News Service. The Environmental Protection Agency was coordinating with Coffeyville Resources to clean up the spill and to ensure that oil did not contaminate drinking water downstream.

In these false-color images, the city of Coffeeville is silver and white. Vegetation is red, bare earth is pale gray, and water is dark blue. The Coffeyville Resources Refinery is the concentrated mass of silver, accented with large, white circular storage tanks, northeast of the city. In the top image, the refinery is surrounded by a pool of blue flood water. The lower image, taken on May 19, 2007, shows the area in normal conditions.

Downstream from the refinery (to the south) is a grid of streets surrounded by plant-covered land. A few clusters of buildings line the larger streets, but few other large buildings are evident in the area, indicating that this is probably a residential neighborhood. Residual oil-tainted water creates traces of dark blue in the eastern half of the neighborhood. Smudges of blue west of the refinery indicate that the river flooded this part of the city as well.

Beyond these areas, the flooded river seemed to remain confined behind levees on its flood plain. The high levees resemble dark red walls hemming in defined geometric shapes, which are filled with water in the top image, but are mud-gray in the lower image. Additional flooding along the Verdigris River is shown in the large image. A broader view of floods in southeastern Kansas is available in the Natural Hazards section of the Earth Observatory.

You can download a 15-meter-resolution KMZ file of Coffeyville suitable for use with Google Earth.

Floods in Kansas and Missouri

Rivers across eastern Kansas and western Missouri flowed high in July 2007 after a series of storms inundated the region with heavy rain.

Floods in Kansas and Missouri

Though water levels had started to subside, the Australian city of Rockhampton was still inundated when this image was taken on January 7, 2011.

June and July 2007 brought drenching rain and devastating floods to England. One of the hardest hit regions was Gloucestershire, in southwest England. The floods started in late June and continued throughout July.