Dust Plume over the Atlantic 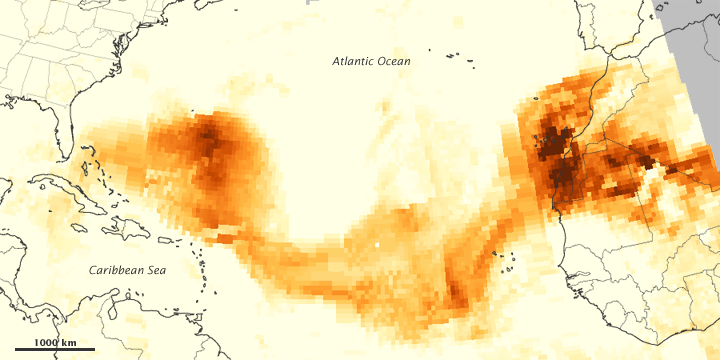 Sand in the Sahara Desert doesn’t always stay put. Tiny particles can be lofted into the air, eventually landing elsewhere in that vast sandy desert. Sometimes dust from the Sahara traverses an entire ocean. That was what happened in July 2012, when a dust plume extended across the Atlantic Ocean toward the Caribbean Sea and Florida.

The dust followed a southward-sweeping arc over the ocean, and remained relatively thick northeast of the Caribbean islands. In the Western Hemisphere, Saharan dust has costs and benefits. Heavy dust transport to the region has coincided with coral declines, yet without regular dustings, some Caribbean islands would be barren rocks devoid of soil. Saharan dust also provides soil to the Amazon Rainforest.

For residents of southern Florida, dust from the Sahara can aggravate breathing difficulties. In July 2012, National Weather Service meteorologists warned that people with respiratory problems should take precautions, but explained that the dust transported across the Atlantic Ocean typically remains 5,000 to 6,000 feet (1,500 to 1,800 meters) above ground. A more likely consequence of the dust would be a “milky or hazy appearance” to southern Florida’s skies.

Dust over the Atlantic Ocean