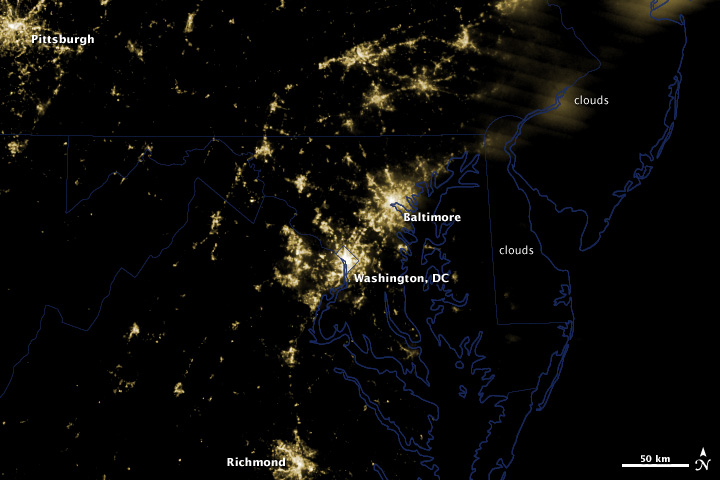 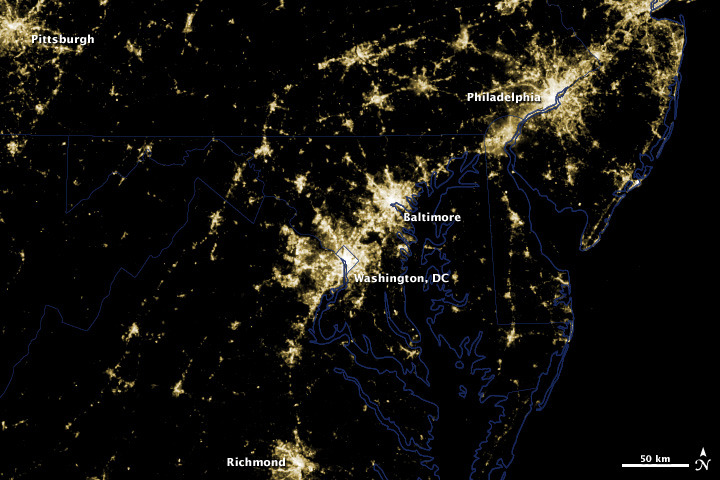 These before and after images from NASA’s Suomi National Polar-orbiting Partnership satellite show the power outages in the clear skies over Washington, DC and Baltimore that occurred as a result of a rare, fast-moving thunderstorm system on Friday, June 29th.

Extensive power outages in Washington, DC and Baltimore are visible in these images. Clouds obscure the lights of Philadelphia and other areas north and east of Baltimore. Of particular interest is the loss of light to the north and west of Washington, DC along the 270 and 66 interstate highways and Maryland route 267.

Known as a “derecho,” the storm combined intense lightning and rain with hurricane-force winds that were upwards of 60 miles per hour (~96.5 kilometers per hour). It killed 22 people and caused some 4.3 million households to lose power for days.

Derecho is the Spanish word for straight and the storm raced from west of Chicago across Illinois, Indiana, Ohio, West Virginia, Virginia, Maryland, and Washington, D.C.

According to the National Weather Service, the gigantic windstorms of a derecho are as powerful as tornados, but the winds don’t twist, instead driving in a straight line. To be classified as a derecho, the swath of wind damage must extend more than 240 miles and the storms are powered by hot, humid weather.

These images were taken with the day/night band of S-NPP’s Visible Infrared Imaging Radiometer Suite (VIIRS). Suomi NPP was launched from Vandenberg Air Force Base on October 28th, 2011 and is the result of a partnership between NASA, the National Oceanic and Atmospheric Administration, and the Department of Defense.

A powerful line of thunderstorms knocked out power to millions of households in the U.S. Midwest and Mid Atlantic on June 29, 2012.

On June 29, 2012, a windstorm started in northwestern Indiana, and traveled roughly 600 miles (1,000 kilometers) eastward to the Atlantic Ocean.

Despite the blustery weather, more than a million people gathered in Washington, D.C., on January 20, 2009, to witness and celebrate the inauguration of the forty-fourth president of the United States.