Linear Dunes of the Caprivi Strip 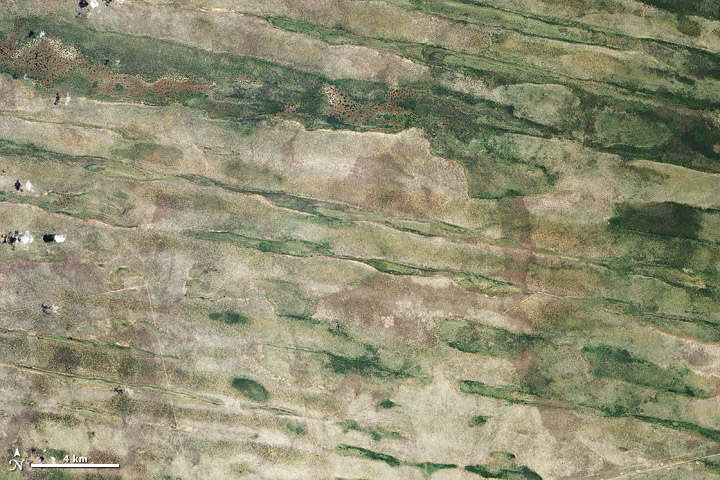 In far northeastern Namibia, there is a skinny stretch of land sandwiched between Angola, Botswana, and Zambia. The Caprivi Strip receives more than 600 millimeters (24 inches) of mean annual rainfall and experiences periodic floods, making it almost moist compared to the much drier parts of the country.

On February 1, 2012, the Advanced Land Imager (ALI) on NASA’s Earth Observing-1 (EO-1) satellite captured this natural-color image of the Caprivi Strip just north of the Okavango River (visible in the large image). Here the land is striped, as if a giant had dragged a rake over the landscape. Those stripes are linear dunes, and some are more than 100 kilometers (60 miles) long. Their presence suggests much drier conditions in the past.

Dunes generally form from wind-blown sand over many years. One characteristic of linear dunes is that they tend to remain intact long after the dry conditions cease. And because they don’t migrate like marching dunes, linear dunes preserve dirt and rocks that geologists can later use to understand past conditions.

A study published in 2000 sampled dunes throughout the Caprivi region and found that they likely formed under arid conditions between roughly 60,000 and 20,000 years ago. A study in 2003 concluded that dune construction may have been especially pronounced between 36,000 and 28,000 years ago. After the dunes formed, conditions in the Caprivi Strip moistened enough for the dunes to support vegetation—woodlands on the dune ridges, and grasses and shrubs in the valleys between.

Although studies indicate that conditions in this region were drier when the dunes formed, the dune-building periods seem to have been punctuated by humid periods, as indicated by sediments found in nearby caves and ancient lake sediments. About 16,000 years ago, a humid period prompted the filling of Etosha Pan. Now a saltpan, Etosha withered partly due to drying climate, but also because of changes in river routes.

Giant stripes in the Caprivi Strip of northeastern Namibia hint at a very different climate in the region’s past.

This detailed true-color image from February 24, 2011, shows the variety of sand dunes that make up the Algodones Dunes in southeastern California.

Linear dunes dominate the landscape of eastern Namibia. Part of the Kalahari Desert, the dunes likely formed more than 10,000 years ago.

he Issaouane Erg (sand sea) is located in eastern Algeria between the Tinrhert Plateau to the north and the Fadnoun Plateau to the south. Considered to be part of the Sahara Desert, the Issaouane Erg covers an area of approximately 38,000 km2. These complex dunes form the active southwestern border of the sand sea.