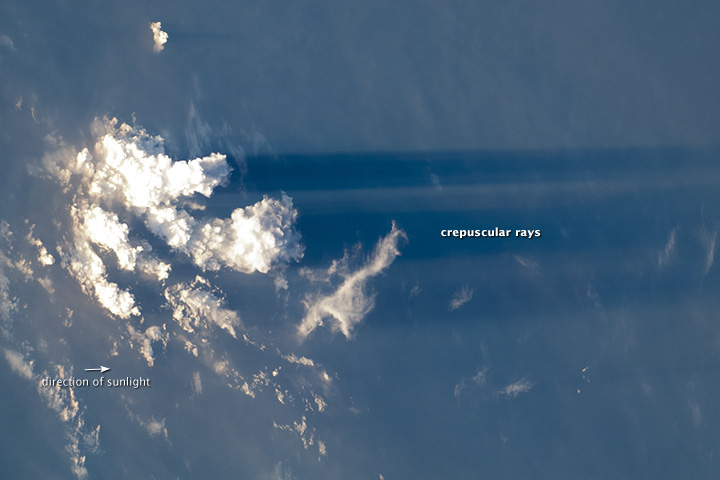 The sight of shafts of light streaming down from the heavens through a layer of clouds has provided many an artist, scientist, and philosopher with inspiration. Atmospheric scientists refer to this phenomenon as “crepuscular rays,” referring to the typical observation times at either sunrise or sunset.

The shadowed areas bounding the rays are formed by clouds or mountain tops that block the path of sunlight or moonlight. However, obstructions alone are not sufficient to create crepuscular rays. The light also must be scattered by airborne dust, aerosols, water droplets, or molecules of air, providing a visible contrast between shadowed and illuminated parts of the sky.

When observed from the ground, crepuscular rays appear to radiate outwards from the source of light due to the effects of distance and perspective. However, the rays are actually parallel. This astronaut photograph from the International Space Station provides an unusual viewing perspective from above the rays and a clear illustration of their parallel nature. The sun was setting to the west (image left) on the Indian subcontinent, and cumulonimbus cloud towers provided the shadowing obstructions. The rays are being projected onto a layer of haze below the clouds.

Astronaut photograph ISS029-E-31270 was acquired on October 18, 2011, with a Nikon D2Xs digital camera using a 110 mm lens, and is provided by the ISS Crew Earth Observations experiment and Image Science & Analysis Laboratory, Johnson Space Center. The image was taken by the Expedition 29 crew. The image has been cropped and enhanced to improve contrast. Lens artifacts have been removed. The International Space Station Program supports the laboratory as part of the ISS National Lab to help astronauts take pictures of Earth that will be of the greatest value to scientists and the public, and to make those images freely available on the Internet. Additional images taken by astronauts and cosmonauts can be viewed at the NASA/JSC Gateway to Astronaut Photography of Earth. Caption by William L. Stefanov, Jacobs/ESCG at NASA-JSC.

Crepuscular rays stream through the clouds over India, providing scientific and spiritual inspiration. 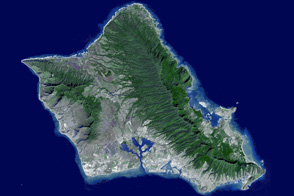 Cold winter conditions set the stage for these unusual clouds that can form due to airplane traffic.