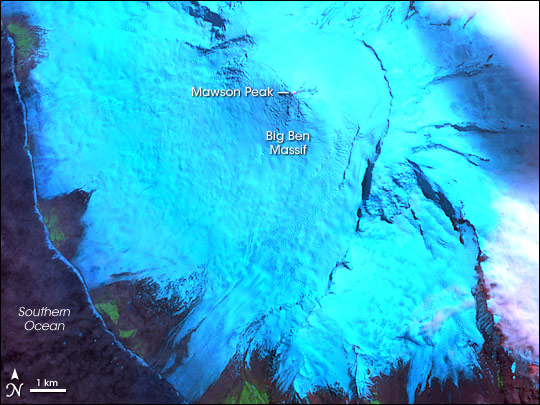 Closer to Antarctica than any other major landmass, Heard Island sits in the far southern Indian Ocean two-thirds of the way from Madagascar to Antarctica. At the center of the remote, ice-covered island are the Big Ben massif, a large section of the Earth’s crust that has been pushed up into a dense, rocky mountain by tectonic action, and an active volcano, Mawson Peak. The geologic activity that formed these features continues in the form of frequent eruptions from Mawson Peak.

The volcano’s current phase of activity began in May 2006, and it continued through December 2006, when the Advanced Spaceborne Thermal Emission and Reflection Radiometer (ASTER) on NASA’s Terra satellite captured this image. Made with both infrared and visible light, the image shows signs of volcanic activity on December 8, 2006. A glowing dot of red on Mawson Peak is thought to be a small lava lake in the summit crater. A fresh lava flow extends 700 meters east of the crater, creating a dark blue smudge on the otherwise even field of snow, which is blue-green in this false-color image. The rocky Big Ben Massif south of Mawson Peak similarly wrinkles the surface of the snow, though some of the apparent roughness may actually be icy clouds.

Previous volcanic episodes, including those in 2000-2001 and 2003-2004, have lasted about a year. Due to its isolated location, Heard Island is rarely visited, and satellite imagery provides the only regular information on eruptive activity.

Satellite images capture proof of the eruption of Mawson Peak.

Satellite images capture proof of the eruption of Mawson Peak. 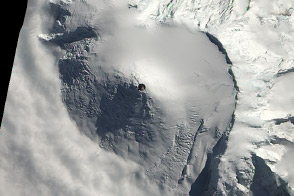 Signs of an Eruption on Heard Island

Despite a quiescent appearance, there are hints of volcanic activity at the remote Mawson Peak.

Signs of an Eruption on Heard Island

Despite a quiescent appearance, there are hints of volcanic activity at the remote Mawson Peak.