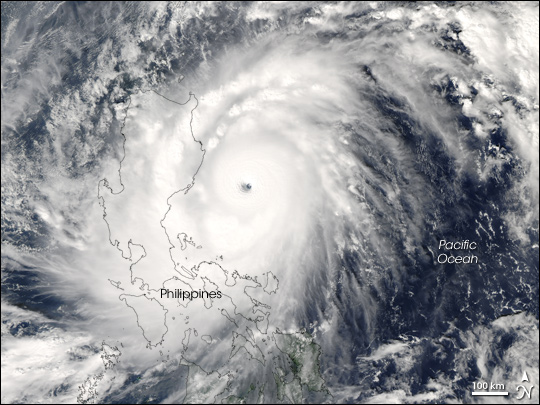 Super Typhoon Cimaron struck the northernmost large island in the Philippines, Luzon, on October 29, 2006. According to BBC News Service, the typhoon was the most powerful to strike the island chain since 1998, lashing Luzon with 200-kilometer-an-hour (125-mile-per-hour) winds and torrential rain. As of October 30, 13 deaths directly attributable to the storm had been reported.

This photo-like image was acquired by the Moderate Resolution Imaging Spectroradiometer (MODIS) on the Aqua satellite on October 29, 2006, at 1:00 p.m. local time (5:00 UTC). Super Typhoon Cimaron was a tightly wound ball of clouds just hours from landfall on Luzon. Winds were around 255 kilometers per hour (160 miles per hour) at the time of this image, according to Weather Underground’s Hurricane Archive. As the storm came ashore, it eased off these Category 5-strength winds, but it still struck the mountainous islands with Category 4 winds hours after this satellite image was taken.

You can also download a 250 m resolution Typhoon Cimaron KMZ file for use with Google Earth.