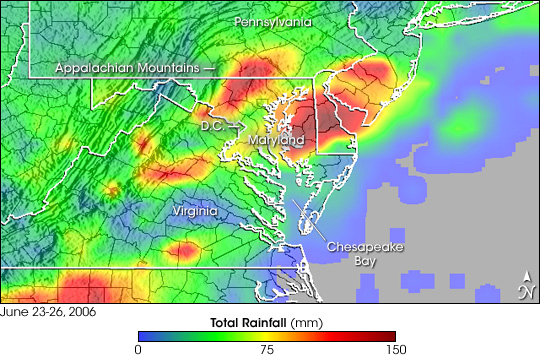 From June 23 to June 26, heavy downpours pounded the Mid-Atlantic region of the United States, including the nation’s capital, Washington, D.C. At one point, the primary interstate highway circling the city, the Capital Beltway, was closed after a mudslide covered the road. Other roads in the region were also closed as a result of widespread flash flooding. The rains fell as a steady stream of very moist tropical air was channeled up the East Coast from the South. The air stalled over the Mid-Atlantic region, where it was continuing to produce heavy rain as of June 26.

This image shows an estimate of rainfall totals for June 23 through June 26. The heaviest rainfall totals for the period (shown in red) were around 6 inches, occurring over Maryland’s Eastern Shore (east of the Chesapeake Bay) and central Delaware. Locally, 10 to 12 inches of rain was reported in Federalsburg, Maryland, which falls within the dark red region in eastern Maryland. Other areas of heavy rain are evident northwest of Baltimore between the city and the eastern slopes of the Appalachian Mountains, over north-central North Carolina, and in parts of Virginia and southern New Jersey.

From June 23 to June 26, heavy downpours pounded the Mid-Atlantic region of the United States, including the nation's capital, Washington, D.C. Coastal waters were brown with sediment after the event.