Floods Along the Evros (Meric) River 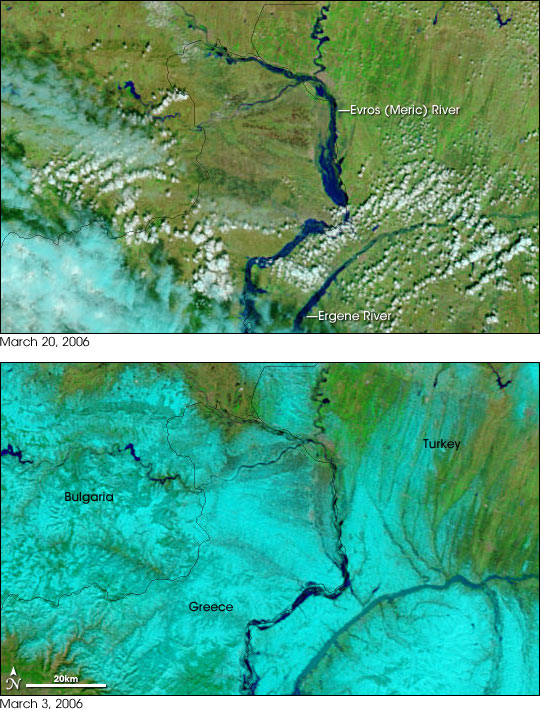 Rain and melting snow combined to push the Evros (Meric) River over its banks in March 2006. The river, which forms the border between Turkey and Greece, is lined by fertile agricultural land, much of which was inundated in the floods. Though springtime flooding is common along the river, the floods of 2006 have been the worst in 15 years, reported Reuters.

The floods had receded somewhat when the Moderate Resolution Imaging Spectroradiometer (MODIS) on NASA’s Terra satellite captured the top image on March 20, but flooding is still evident in contrast to March 3, lower image. One of the reasons for the flooding is also evident in the comparison between the two images. On March 3, snow (pale blue in this image) covered the area around the river, but by March 20, the snow had disappeared.

According to news reports, the flooding began with heavy rainfall in mid-March, and snowmelt added to the rising waters of the Evros and its tributaries, particularly the Arda River in Bulgaria. Several artificial lakes along the Arda overflowed, and more than 75,000 acres of land have been flooded. In some cases, the military had to be called in to evacuate people from flooded towns. In northern Bulgaria, the Danube River also flooded in mid-March, forcing the evacuation of riverside towns. The Danube is visible in the large version of the images; it is the large river flowing across the top of the scene.