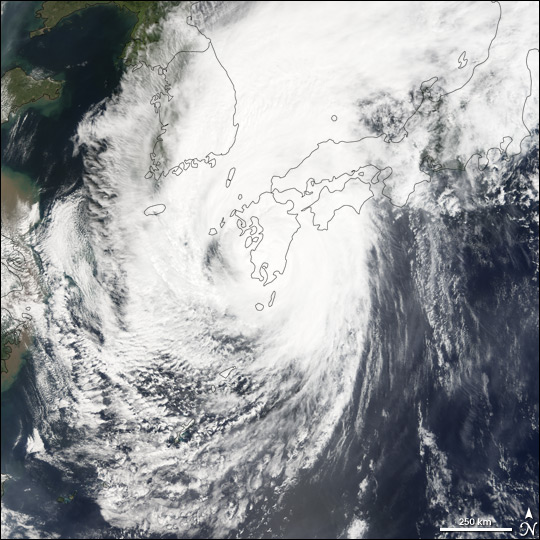 Typhoon Nabi was a Category 2 typhoon in the western Pacific when the Moderate Resolution Imaging Spectroradiometer (MODIS) on NASA’s Terra satellite captured this image on September 6, 2005 at 11:05 a.m. Tokyo time. It had sustained winds of around 160 kilometers an hour (100 miles per hour), and it was heading north across the southern end of Japan. The eye of the storm is roughly centered in the image, and the thick storm clouds completely hide the island of Kyushu. To the northeast of the eye, the smaller island of Shikoku and the largest Japanese island, Honshu, are also under the clouds.

These clouds brought a deluge to the southern islands and caused dangerous landslides in the region’s mountainous terrain. The landslides killed several people on Kyushu. As high waves pounded the coast, as much as 51 inches of rain may have fallen in 24 hours as the storm moved slowly northward into the Sea of Japan. The Japanese government had ordered evacuations for more than 100,000 people in the southern islands, according to reports from BBC News. Flights, road traffic, and ferry services were disrupted, and hundreds of thousands of people and businesses lost power.

Super Typhoon Nabi formed in the western Pacific near Guam at the end of August and slowly built up strength as it veered towards southern Japan and Korea.

Typhoon Man-Yi was pummeling the Japanese island of Okinawa with winds between 230 and 295 kilometers per hour (125-160 knots, 144-184 miles per hour) and heavy rain on the morning of July 13, 2007. he immense storm covered hundreds of square kilometers with spiraling bands of thunderstorms.