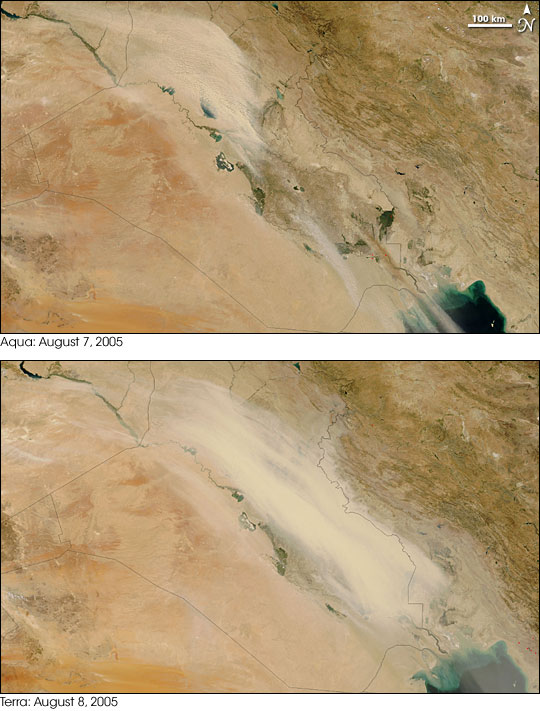 The city of Baghdad ground to a halt on August 8, 2005, under a cloud of suffocating dust. According to The New York Times and the Website TerraDaily, reduced visibility slowed traffic to a crawl among those determined to brave the storm while many commuters stayed home. A number of Iraqis were quoted as saying that this dust storm is the worst they have seen in years. The storm also reportedly overwhelmed Baghdad’s Yarmuk Hospital, which treated more than a thousand people with respiratory distress. City officials shut down Baghdad’s main airport, and Iraq’s constitution talks were postponed.

The Moderate Resolution Imaging Spectroradiometer (MODIS) flies onboard NASA's Aqua and Terra satellites. Aqua MODIS captured the dust storm entering north Iraq (center) on August 7 (top). Terra MODIS caught the same storm in full force on August 8 (bottom). Though reports describe the dust as orange at ground level, it appears light beige in both of these images. The storm swept southeast through Iraq toward the Persian Gulf (lower right), the city of Baghdad in the middle of its path. Some of the dust spilled eastward across the border of Iraq into Iran, appearing to lap the edges of the rugged mountains.

Iraq’s summertime climate is hot, dry, and dusty. Dust storms such as the one pictured here are driven by a northwest wind called the shamal (or shumal, or shimal) that can rip through the Tigris and Euphrates River valleys of central and southern Iraq at any time of the year, but which blows almost constantly through June and July. Shamal winds can last for several days in a row, strengthening during the day and weakening at night, and creating devastating dust storms.

A massive dust storm in early August 2005 brought daily activities in Iraq to a standstill for a day.

This true-color image, taken July 3, 2009, shows thick dust between Syria and the Iraq-Iran border. Over northwestern Iraq, the dust takes on a strangely textured appearance.

This true-color image, taken July 3, 2009, shows thick dust between Syria and the Iraq-Iran border. Over northwestern Iraq, the dust takes on a strangely textured appearance.