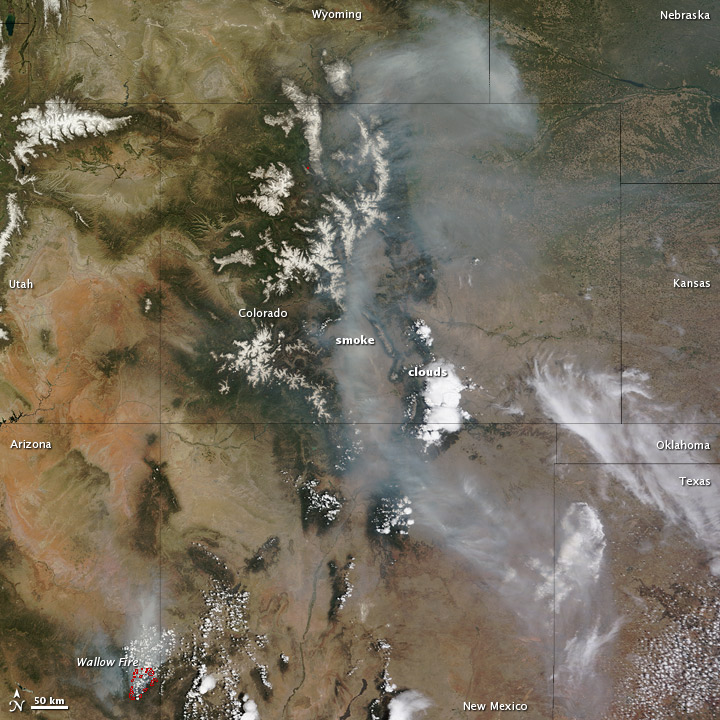 Smoke from an Arizona wildfire spanned multiple states in early June 2011. According to the U.S. Air Quality “Smog Blog,” smoke from the Wallow Fire pushed air quality to unhealthy levels as far east as Alabama and Georgia. Closer to the source of the fire, thick smoke traveled across Colorado and into Nebraska.

The Moderate Resolution Imaging Spectroradiometer (MODIS) on NASA’s Terra satellite captured this natural-color image on June 5, 2011. Smoke differs from nearby clouds in its darker color and less distinct margins.

The smoke plume visible in this image appears disconnected from the Wallow Fire just west of the Arizona-New Mexico border, perhaps due to shifting winds. In Colorado, smoke extends northward across the state, blowing over the Rocky Mountains and into Wyoming and southwestern Nebraska. West of the smoke plume, skies are clear.

The Wallow Fire appears in the lower left corner of the image, and the red outlines indicate active blazes. On June 6, InciWeb reported that the Wallow Fire had burned 192,746 acres (78,002 hectares). The fire broke out on May 29, and as of June 6, the cause of the fire was still under investigation.

Smoke over the Atlantic Ocean

Acquired in mid-June 2011, this natural-color image shows smoke from fires in Florida and Georgia blowing over the Atlantic Ocean.

Acquired September 6, 2010, this natural-color image shows a river of smoke flowing eastward from a wildfire west of Boulder, Colorado.

Smoke from the Rim Fire

Smoke from the Rim Fire brought unhealthy air to Yosemite National Park and the San Joaquin Valley over the Labor Day Weekend.