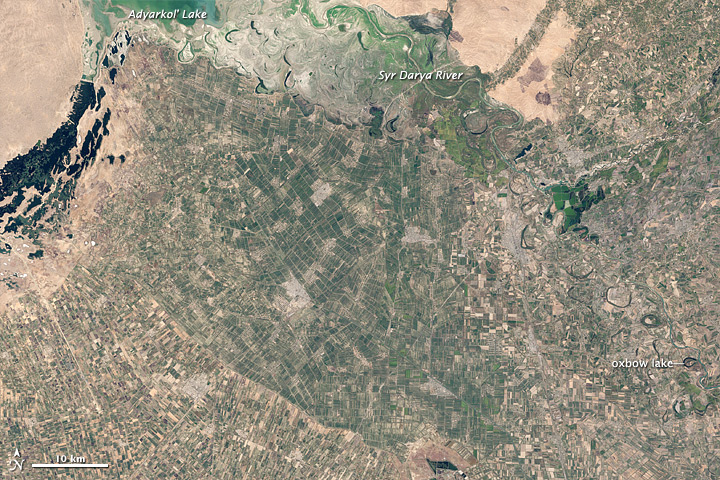 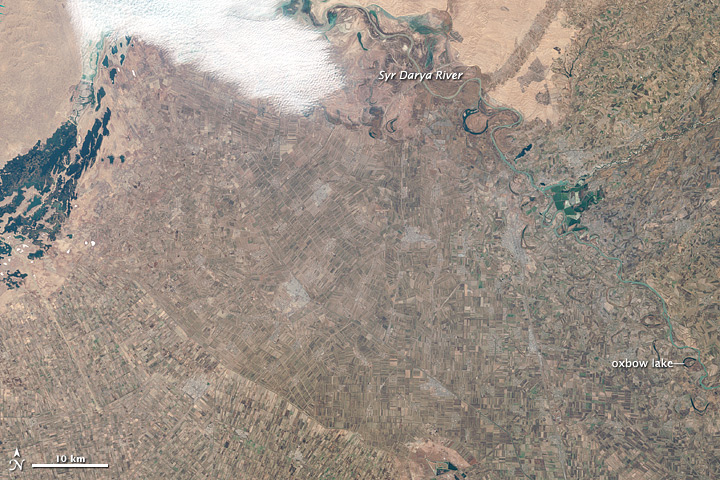 Uzbekistan is a dry, landlocked country, covered mostly by the sands of the Kyzyl Kum (Qizilqum) Desert. A little over 10 percent of the land is intensely cultivated, however, especially in river valleys. One such area occurs in Jizzax (Jizzakh) Province, where farmed land extends from the edge of a large lake, Aydarkol’, eastward past the Syr Darya River.

Landsat 7 captured these natural-color satellite images of farmed lands in Jizzax Province in 2002. The top image shows the area on September 20, and the bottom shows the same area on November 23. Just two months bring significant changes. At the end of summer, varying shades of green predominate. As autumn progresses, however, the fields turn brown. The only areas of lingering green occur in the shallow waters of Aydarkol’ and isolated patches along the river.

Through this flat, cultivated region, the Syr Darya River takes a meandering path, looping east and west. Evidence of former river wanderings appear in the oxbow lakes lining the river. When a meandering river takes a shortcut, the longer path it used to follow becomes isolated. The result is a semicircular water body that testifies to the river’s past.

Acquired September 20 and November 23, 2002, these natural-color images show agricultural fields in Jizzax Province at the end of summer and in late fall.