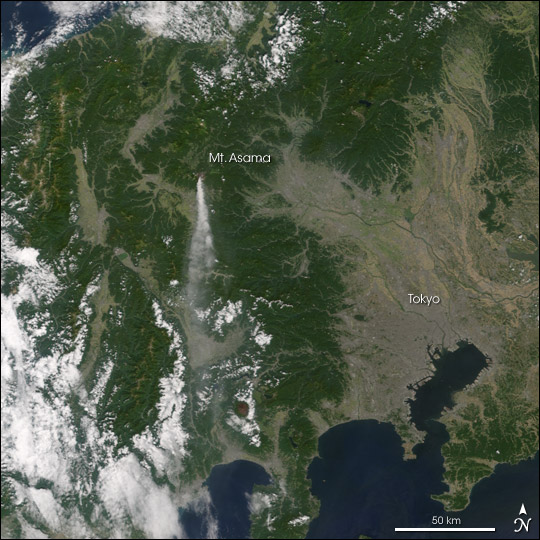 On September 1, 2004, Japan's Mt. Asama erupted explosively. After a two-week rest, the volcano continued its eruption in several small bursts starting on September 14, sending plumes of ash from its 2,568 meter-high (8,425 ft) summit crater. The Moderate Resolution Imaging Spectroradiometer (MODIS) on NASA’s Terra satellite captured this view of the smoking volcano at 1:30 UTC (10:30 a.m. Tokyo time) on September 16, 2004. In this image, the ash plume is heading due south towards Suruga Bay. About 140 kilometers to the southeast, Tokyo is the cement-colored region around the Bay of Tokyo.

This activity is not unusual—Mt. Asama is the most active volcano on Honshu, Japan’s main island. Its last eruption was in 2003, though the current eruption is its most violent since 1983.

On the morning of January 26, 2011, Shinmoe-dake, a volcano on Japan’s Kyushu island, erupted spectacularly.