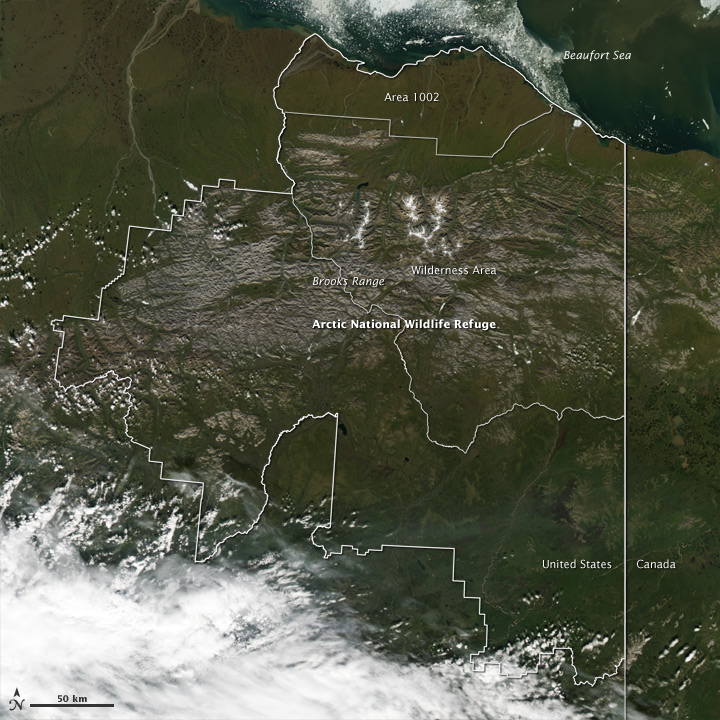 December 6, 2010, marks the fiftieth anniversary of the Arctic National Wildlife Refuge (ANWR). The refuge is the largest and northernmost national wildlife refuge in the United States. From north to south, ANWR spans 200 miles, and it covers 19.3 million acres—the size of South Carolina. Described as “the most biologically diverse conservation unit in the circumpolar north” by the U.S. Fish and Wildlife Service, ANWR is home to 42 species of fish, 37 species of land mammals, and eight species of marine mammals. The refuge is also full-time or part-time home to more than 200 bird species.

The northernmost part of ANWR is tundra-covered coastal plain. Area 1002 derives its name from a section of the Alaska National Interest Lands Conservation Act, which the U.S. Congress passed in 1980. The act required an assessment of the area’s biodiversity, as well as studies on the potential effects of development, and oil and gas exploration.

ANWR is open to the public year round but the refuge is not easy to reach. Visitors must fly, boat, or hike to ANWR, and hikers must navigate the refuge’s terrain without the aid of established trails. Snow and ice dominate the landscape for as much as nine months out of every year, and from mid-November to mid-January, the Sun stays below the horizon. From late April to mid-August, however, visitors to ANWR can enjoy continuous sunlight and fields of wildflowers.