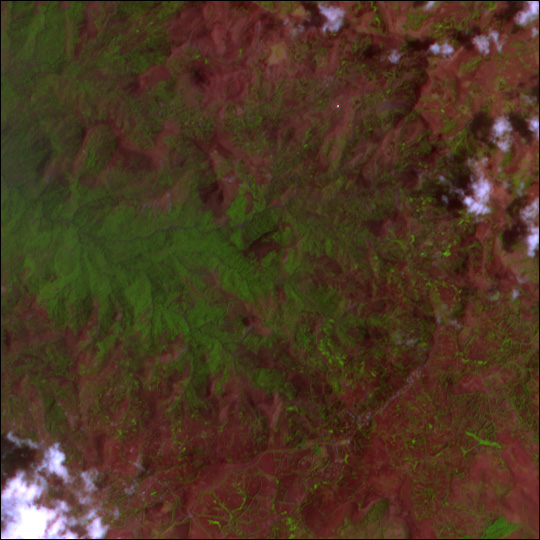 The steep forested slopes of the seventeen million-year-old Monts Bamboutos volcano rise 2740 meters (8990 feet) above sea level in southwestern Cameroon. The collapsed volcano provides loose, rich volcanic soil, which has brought farmers to the region. Now, the same soil that attracted farmers is a threat to their lives and livelihoods. As the trees were removed to make way for agriculture on slopes as steep as 30 degrees, the soil eroded into loose, unstable layers—a perfect formula for landslides. In 2003, heavy rains triggered a series of deadly landslides in the caldera. At least 20 people died, and hundreds more were left homeless. The threat posed by landslides to the region is increasing both because soil-anchoring trees are being cleared and because the susceptible population around the crater is growing.

The above image, taken on March 8, 2004, by Advanced Spaceborne Thermal Emission and Reflection Radiometer (ASTER) on NASA’s Terra satellite, shows some of the patterns of development that led to the landslides. Here, bare soil is reddish brown. A dark green finger of forest projects into the center of the image from the left. Tiny, brighter green squares are agricultural fields. The patterned grid of green on the slopes of the mountain have been cultivated.

By looking at regions where bare soil has been exposed on steep slopes, a team of scientists at ParBleu technologies is using this and other satellite images to predict where landslides may occur in the future. The team studies changes in high-resolution satellite imagery over time and correlates those changes to ground-based observations. Their observations went into producing a risk assessment map for the government of Cameroon in time for the rainy season of 2004, which began at the end of May and will run through October.

Freshly exposed earth traces down the slope of Mount Elgon in Uganda where a large landslide buried three villages on March 2, 2010. This cloud-free, natural color image is from March 11.

Freshly exposed earth traces down the slope of Mount Elgon in Uganda where a large landslide buried three villages on March 2, 2010. This cloud-free, natural color image is from March 11.

Landslides in the Philippines