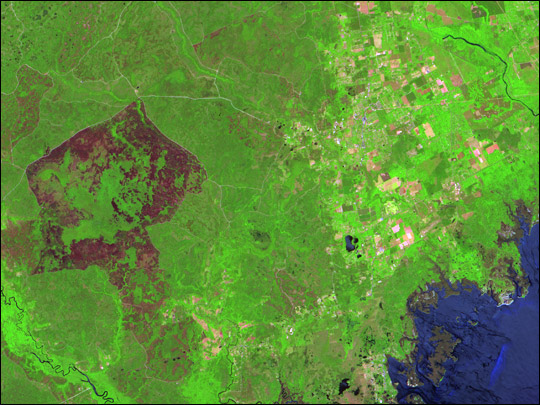 By April 18, 2004, the East Fork Fire in the Apalachicola National Forest in western Florida was about 90 percent contained. Reports from the Bureau of Land Management and U.S. Forest Service’s Southern Area Coordination Center list the cause of the fire as arson. The fire broke out on April 4, 2004, and by April 11, it had affected 14,600 acres. By April 18, the SACC reported the size as 26,279 acres. (The MODIS instrument aboard NASA’s Aqua satellite acquired this image of the fire on April 10.)

Much of the region burned in the fire was in a part of the forest called the Bradwell Bay Wilderness. Because of the wilderness designation, firefighters are guided by a special set of rules called Minimum Impact Suppression Techniques (MIST). According to the Forest Service's Website on the fire, MIST includes “things like using wet lines or foam instead of digging a firebreak in the soil, cutting stumps close to the ground so they won't be seen, camouflaging stumps and fresh cuts with soil or branches to make them look aged, pulling downed branches and leaves over old trails to obscure tracks of firefighters, [and] if equipment is used, making sure it does not rut or compact the soil.”

This image from April 16 shows the large area burned by the fire, which appears as dark pink ring-shaped patch at the left side of the scene. Vegetation appears green, and naturally bare soil or areas of very low vegetation appear light pink. At bottom right is part of the Gulf of Mexico. The scene was captured by the Advanced Spaceborne Thermal Emission and Reflection Radiometer (ASTER) on the Terra satellite.

The East Fork Fire started in the Apalachicola National Forest in western Florida on April 4, 2004, and by April 18 had grown to more than 26,000 acres.

Image of the Day Land Dust and Haze Fires

Looking to RECOVER After the Fire

A NASA project is providing maps of satellite data to emergency response teams during the Woolsey Fire.