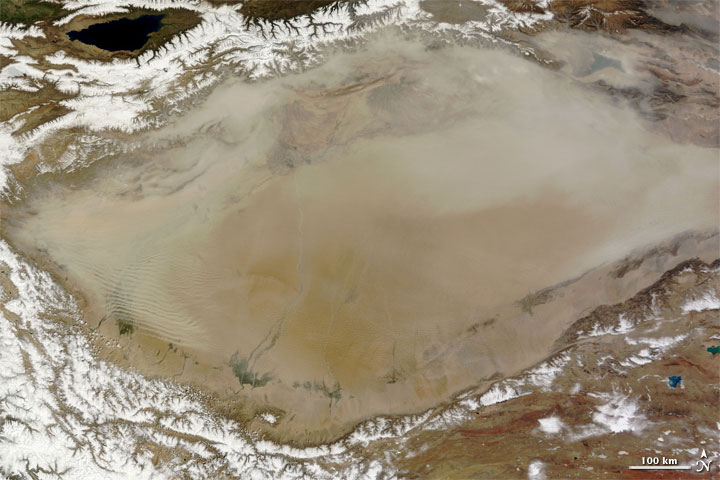 Dust ringed the Taklimakan Desert of northwestern China on April 25, 2010. The light-colored dust is mostly smooth, though waves ripple the surface in the southwest, reflecting turbulence in the air. The low dust also conforms to the shape of the land in the northwest. Squiggly lines in the dust cloud are the clear peaks of the foothills of the Tien Shan mountains, which form the northern edge of the Tarim Basin. Some of the dust appears to be blowing east, perhaps continuing an extensive dust storm from the previous day.

Enclosed by the Tien Shan Range in the north and the Kunlun Shan and Altun Shan in the south, the Tarim Basin receives very little rainfall. Much of the basin is a vast, sandy desert, the Taklimakan. Covering 272,000 square kilometers, the Taklimakan Desert is among the world’s largest deserts. Water flows into the basin from the mountains, feeding ephemeral lakes and marshes, and some more permanent rivers. Dark green, plant-covered land marks the course of the water across the desert in this image.

The Moderate Resolution Imaging Spectroradiometer (MODIS) on NASA’s Terra satellite captured this image on April 25, 2010. The large image is the highest-resolution version of the image. The MODIS Rapid Response Team provides the image in additional resolutions.

Dust ringed the Taklimakan Desert of northwestern China when this true-color satellite image was taken on April 25, 2010.

A spring storm filled the air over the Tarim Basin and nearby deserts with thick dust in late April 2010.

This true-color image from May 5, 2009, shows dust plumes and clouds over the eastern part of the Taklimakan Desert.

Dense dust from at least three regions mingles in the air over northwestern China in this photo-like image from April 24, 2010.