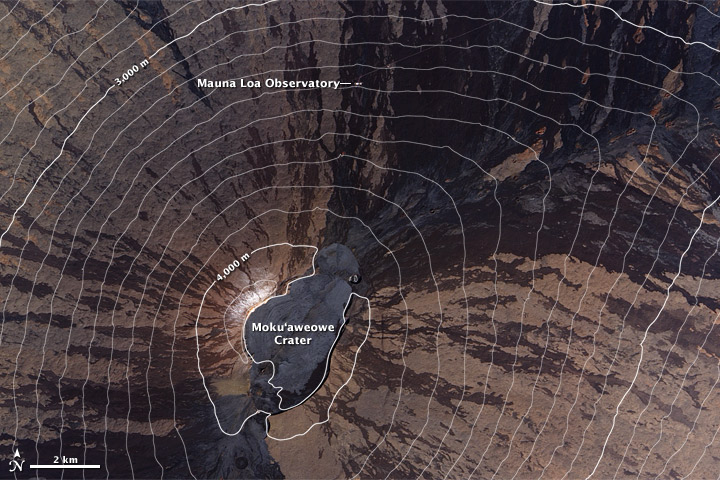 The longest continuous record of atmospheric carbon dioxide levels (1958-present) comes from Mauna Loa Observatory in Hawaii. In many ways the mountain is the ideal location for studying the atmosphere. Isolated in the Pacific, it is far from major sources of pollution. Its high-altitude, lava-coated flanks are free of plants and trees, whose cycles of photosynthesis and respiration affect carbon dioxide concentrations. On the other hand, there would seem to be a major problem with measuring carbon dioxide at Mauna Loa: the mountain is an active volcano.

So, how do scientists know when this happens? Because the carbon dioxide analyzer is measuring emissions continuously, the scientists have an extraordinarily long record of “baseline” measurements. For days on end, carbon dioxide readings barely change at all (less than 3/10 of a part per million from hour to hour, according to Dr. Steve Ryan from the Mauna Loa Observatory). On the small number of nights when the winds at Mauna Loa come from the south, carbon dioxide concentrations at the observatory become variable, rising by several parts per million for minutes to hours.

According to Ryan, “These periods of elevated and variable CO2 levels are so different from the typical measurements that is easy to remove them from the final data set using a simple mathematical ‘filter.’” A more detailed discussion, including graphs of carbon dioxide data collected at Mauna Loa and other observatories around the world, is available in our new Climate Q&A column.

This image was captured by the Advanced Land Imager (ALI) on NASA’s Earth Observing-1 (EO-1) satellite on December 6, 2006.

This satellite image of the summit of Mauna Loa overlaid with contour lines helps illustrate why volcanic emissions from the summit rarely reach the observatory where atmospheric carbon dioxide is measured.