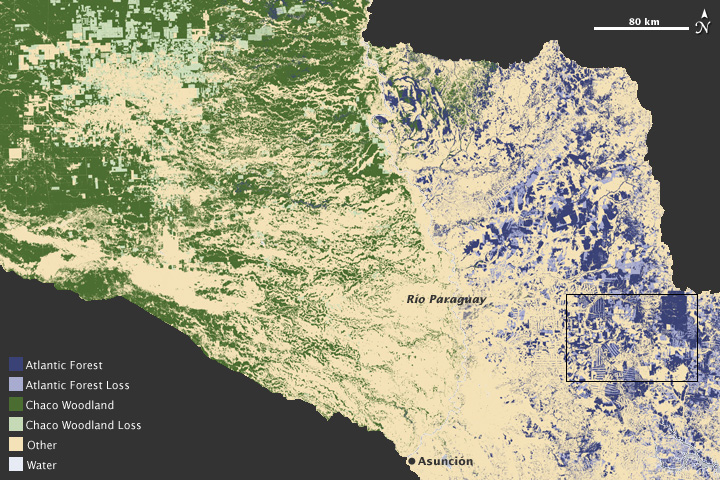 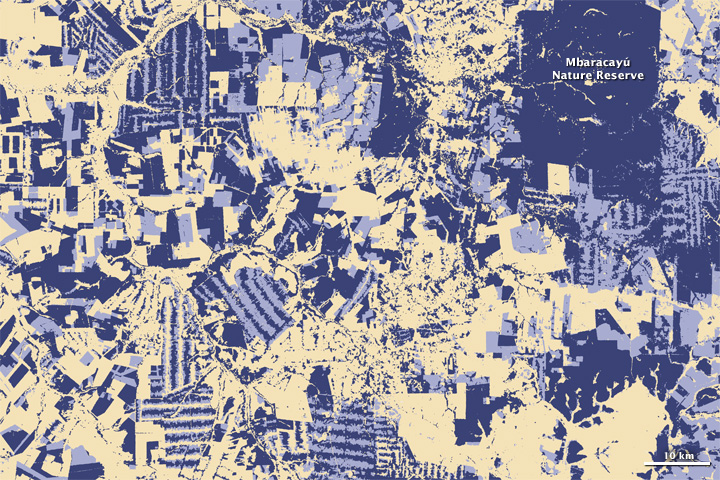 Sandwiched between Argentina to the southwest and Brazil to the northeast, landlocked Paraguay posseses remarkable ecological richness for its relatively small (about the size of California) area. The northwestern part of the country is occupied by the dry woodlands known as the Chaco. In the center of the country, in the lowlands around the Río Paraguay, is the alternately wooded and swampy Humid Chaco. To the east are scattered remnants of the Atlantic Forest, a tropical forest ecologically distinct from the Amazon Rainforest.

This map provides a high-resolution look at forest change in Paraguay between 1990 and 2000. Based on data from NASA’s Landsat 5 and Landsat 7 satellites, the image shows how much of the country’s two dominant forest types existed in 2000 and how much was lost due to human activities in the preceding decade. The lower image is a close-up of the area around Mbaracayú Nature Reserve, in central Paraguay on the border with Brazil. Geometric shapes—rectangular fields, narrow roads—testify to the human origin of the forest changes.

Based on this forest change analysis, scientists from NASA’s Goddard Space Flight Center, the University of Maryland, and other organizations found that Paraguay lost 13 percent of its forests to agriculture and other human activity between 1990 and 2000. The greatest percent losses were in the already heavily exploited Atlantic Forest east of the river. The team estimated that Paraguay lost nearly 40 percent of its Atlantic Forest between 1990 and 2000.

In addition to these dramatic losses for the region as a whole, another worrisome trend emerged from the analysis: intense pressure on all the buffer zones around Paraguay’s protected areas, including Mbaracayú Nature Reserve. In other parts of the world, the loss of buffer zones around parks and nature reserves has been followed by rapid encroachment into reserves themselves. To continue preserving the country’s tremendous biodiversity, the scientists urged those responsible for the reserves to be vigilant in monitoring forest change at their borders.

NASA Earth Observatory image by Robert Simmon, based on data from the University of Maryland Global Land Cover Facility. Caption by Rebecca Lindsey.

Between 1990 and 2000, Paraguay lost about 13 percent of its forests, including nearly 40 percent of the Atlantic Forest.

Forests are being turned into rubber plantations, farmland, and timber at a rapid rate.