Dust blew across southern Bolivia on July 21, 2009, as the Moderate Resolution Imaging Spectroradiometer (MODIS) on NASA’s Aqua satellite passed overhead. Many of the dust plumes were thick enough to completely obscure the satellite’s view of the ground surface below. Most of the plumes arose from or near Salar de Uyuni and its neighbor, Salar de Coipasa, two salt flats resting atop Bolivia’s Altiplano, or elevated plain.

Dust plumes from the salt flats blow toward the southeast in this true-color image. Farther east, however, smaller plumes arise from the riverbeds of Rio Grande and Rio Parapeti, and head almost straight south. Two sets of waves appear in this image, but they owe their existence to different sources. Running vertically through the center of the image are the folded strata of Bolivia’s mountains, and the rocks in these folds range in age from Precambrian (more than 550 million years old) to Tertiary (less than 65 million years old). East of this rugged landscape, the land surface is smoother. The wave patterns south of Rio Parapeti result from airborne dust. The cloud bank over Argentina also displays wave patterns.

Strong winds whip thick, multi-colored clouds of dust across the Bolivian highlands in this photo-like image from July 18, 2010. 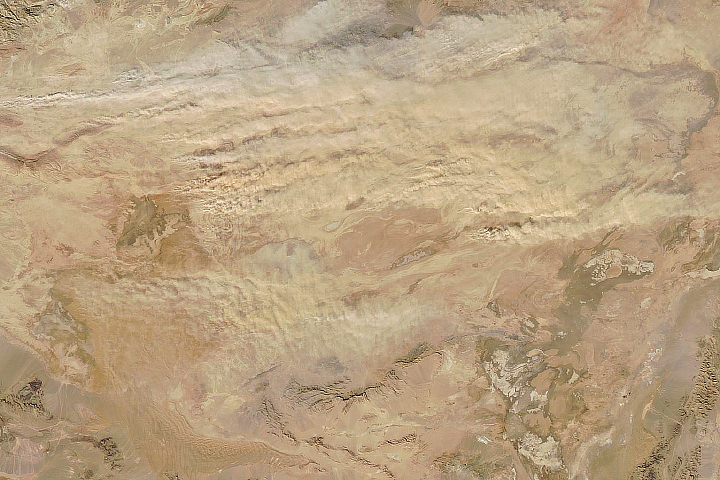 Dust in the Dasht-e Kavir

In this image, two largely parallel dust plumes blow off the coast. The northeast plume is more intense—thick enough in places to completely hide the water below. The other plume is thinner and shows faint wave patterns near the coast.