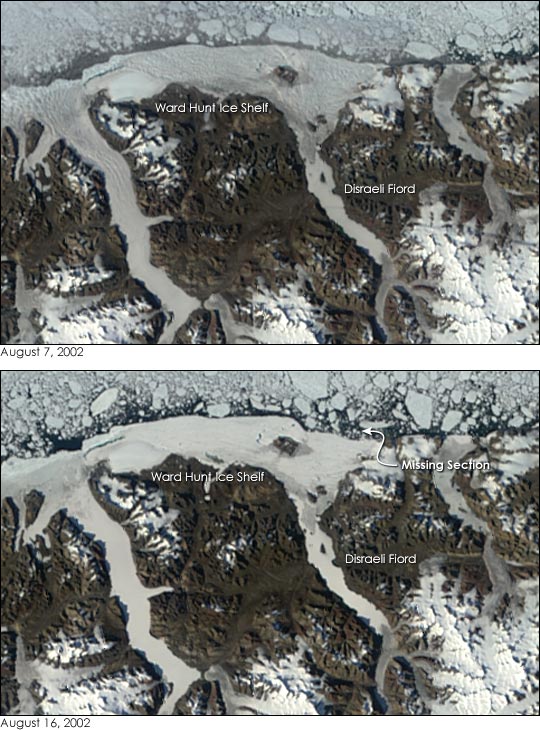 The Arctic’s largest ice shelf is breaking up. The Ward Hunt Ice Shelf is a remnant of the compacted snow and ancient sea ice that extended along the northern shores of Ellesmere Island in Northern Canada until the early twentieth century. Rising temperatures have reduced the original shelf into a number of smaller shelves, the largest of which was the Ward Hunt Ice Shelf on the northwest fringe of the island.

The Ward Hunt Ice Shelf encompasses Ward Hunt Island and covers the mouth of the Disraeli Fiord. Until recently, fresh melt water formed a 43-meter deep lake on top of almost 400 meters of seawater in the fiord. Called an epishelf lake, the relatively fresh water dammed by the 3000-year-old ice shelf became the basis of a rare ecosystem. Disraeli Fiord was the largest remaining epishelf lake in the Northern Hemisphere.

Between 2000 and 2002, the Ward Hunt Ice Shelf began to crack and eventually broke in two, allowing the lake behind it to drain rapidly into the Arctic Ocean. Derek Mueller and Warwick Vincent, of the Centre d’Etudes nordiques at Université Laval in Quebec, Canada and Martin Jeffries of the Geophysical Institute at the University of Alaska Fairbanks described the event in a paper published in Geophysical Research Letters on October 18, 2003.

These true-color Moderate Resolution Imaging Spectroradiometer (MODIS) images captured by the Terra satellite track the deterioration of the shelf in 2002. On August 7, 2002, (top) the ice shelf appears much as it did in all prior images. Though the shelf had already cracked and the lake was draining, the changes were not visible in MODIS images. The next MODIS image, taken on August 16, shows that a large chunk of ice is missing from the northern side of the shelf, to the right of the island. Mueller, et al. note that RADARSAT images likewise show that a section of the shelf broke away sometime between August 6 and August 11, though they suspect that a number of small ice islands calved off the shelf rather than one large iceberg. The MODIS image taken on August 7 narrows the time window of the event even further.

All images provided above are at MODIS’ maximum spatial resolution of 250 meters per pixel.