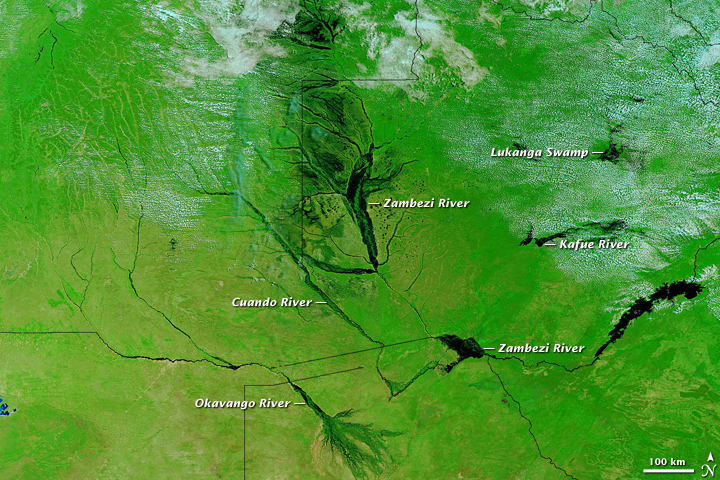 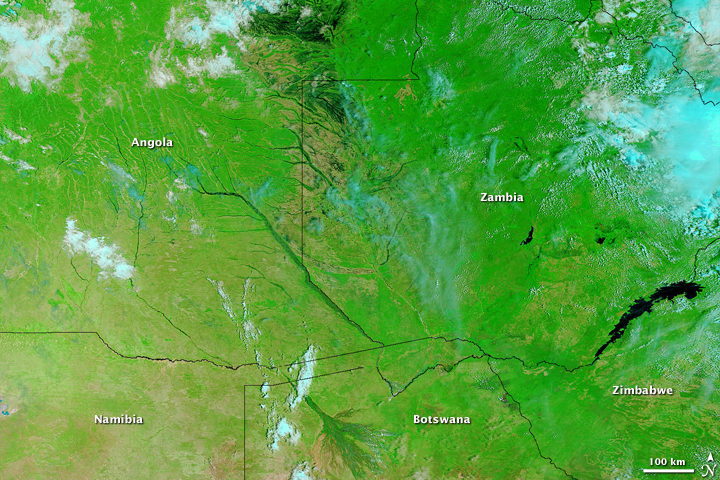 Seasonal flooding regularly swells the rivers of southern Africa, but the first floods of 2009 boded ill for the rest of the season. The Zambezi River reached its second highest level since 1969 in places, reported the UN Office for the Coordination of Humanitarian Affairs. Extreme and damaging floods also occurred along the Okavango (Cubango) River and the multi-channeled Cuvelai River basin in northern Namibia, said the International Federation of Red Cross and Red Crescent Societies. The floods destroyed crops and roads, which may lead to food insecurity, the UN warned. Many of the flooded rivers drain into the Zambezi, increasing the threat of flooding downstream in coming weeks.

This image, taken by the Moderate Resolution Imaging Spectroradiometer (MODIS) on NASA’s Terra satellite on March 25, 2009, provides a nearly cloud-free view of the flooded rivers in the western portion of southern Africa. The lower image, taken by Terra MODIS on January 4, 2009, shows the river systems before the rainy season floods started. Both images are false color to highlight the presence of water on the ground. Water is black or dark blue, while plant-covered land is green, and bare earth is tan. Clouds are light blue and white.

On March 25, the most notable floods were on the Zambezi River, which was kilometers wider than it had been in January. Flooding is also visible on the Okavango, Cuando, and Kafue Rivers and in the Lukanga Swamp.

Rivers throughout the western portion of southern Africa were visibly flooded on March 25, 2009, when this image was captured.

Water flowed from the flooded Zambezi River into the wetland in northern Namibia shown in this image.