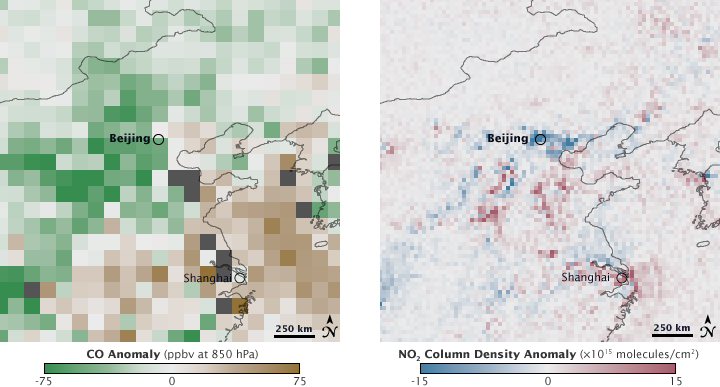 Chinese officials took extreme measures to improve Beijing’s air quality for the 2008 summer Olympic games. Factories were closed and traffic was restricted for two months. Did the restrictions make a difference? According to newly released research conducted by NASA researchers, they did. In August and September 2008, concentrations of carbon monoxide and nitrogen dioxide—pollutants released when fossil fuels are burned in cars, trucks, and power plants—fell dramatically over Beijing. The difference is illustrated in this pair of images.

The left image shows the change in carbon monoxide concentrations over the North China Plain as observed by the Measurements of Pollution in the Troposphere (MOPITT) sensor on NASA’s Terra satellite in August 2008. Areas that are green indicate a decrease in carbon monoxide compared to average values observed during the month of August in 2005, 2006, and 2007. Brown areas show where carbon monoxide concentrations were higher than average. Unlike a ground-based sensor, which records the make-up of the air immediately around it, the satellite sensor measures wide swaths of the atmosphere at a time. In this case, each square represents an area about 100 kilometers across.

The decrease in nitrogen dioxide concentrations likely also contributed to brighter skies. Nitrogen dioxide is the reddish brown haze that often hangs over a city. Noxious on its own, the gas is also a precursor to ground-level ozone, which is the primary constituent of smog and causes respiratory problems.

The research shows how satellite measurements of pollutants can help scientists find more accurate ways to monitor the effectiveness of efforts to reduce emissions, says Kenneth Pickering, a researcher who collaborated on the project. The research was presented at the conference of the American Geophysical Union on December 16, 2008. To read more, see New satellite data reveal the impact of Olympic pollution controls on the NASA web page.

Concentrations of the gas, which is produced by burning carbon-based fuels, have decreased since 2000.

This series of images shows high concentrations of carbon monoxide moving across the United States from the Wallow Fire in eastern Arizona between June 3 and June 6, 2011.