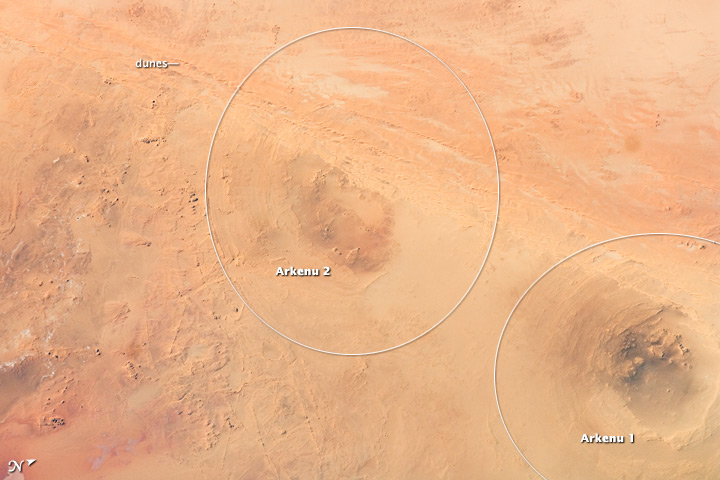 Geologists often study features on Earth, such as impact craters, to gain insight into processes that occur on other planets. On Earth, more than 150 impact craters have been identified on the continents, but only a few of these are classified as double impact craters. One such pair, the Arkenu Craters in northern Africa, is shown in this image. Arkenu 1 and 2 are double impact structures located in eastern Libya in the Sahara Desert (22 degrees, 4 minutes North; 23 degrees, 45 minutes East). Their respective diameters are approximately 6.8 and 10.3 kilometers (4.2 and 6.4 miles). The craters are unusual in that they both exhibit concentric annular ridge structures (white circles in the image outline the position of the outermost visible ridges). In many terrestrial craters these features are highly eroded and no longer visible.

While the circular structure of these features had been noted, the impact origin hypothesis was strengthened in December 2003 when a field team observed shatter cones—cone-shaped features in rocks created by the shock generated during impact. The field research team also observed large outcrops of impact breccias—a jumble of rock fragments generated at the impact site that are now cemented together into an identifiable rock layer. One theory of the craters’ formation proposes they were the result of two impactors, each approximately 500 meters in diameter. The age of the impact event has been dated as having occurred less than 140 million years ago.

While the presence of shatter cones and impact breccias is generally considered to be strong evidence for meteor impact, some scientists now question the interpretation of these features observed at the Arkenu structures. They suggest that the features were caused by erosive and volcanic processes. At present, both craters are being crossed by linear dunes extending northeast-southwest (image upper left to center right). The superposition of the dunes across the annular ridges indicates that they are much younger than the craters.

Astronaut photograph ISS017-E-20538 was acquired on October 21, 2008, with a Nikon D2Xs digital camera fitted with a 400 mm lens, and is provided by the ISS Crew Earth Observations experiment and the Image Science & Analysis Laboratory, Johnson Space Center. The image was taken by the Expedition 17 crew. The image in this article has been cropped and enhanced to improve contrast. Lens artifacts have been removed. The International Space Station Program supports the laboratory to help astronauts take pictures of Earth that will be of the greatest value to scientists and the public, and to make those images freely available on the Internet. Additional images taken by astronauts and cosmonauts can be viewed at the NASA/JSC Gateway to Astronaut Photography of Earth. Caption by Kimberly J. Willis, NASA-JSC.

The Arkenu Craters in northern Africa are one of only a few pairs of double impact structures identified on Earth.

This image shows Gosses Bluff, an impact crater sandwiched between the Macdonnell Range to the north and the James Range to the south in Australia’s Northern Territory—it is about 160 km west of Alice Springs. It is one of the most studied of the Australian impact craters. The impactor, an asteroid or comet, was probably about 1 km in diameter and crashed into the earth about 142 million years ago.

Craters of the Moon National Monument

Craters of the Moon National Monument

Craters of the Moon, Idaho