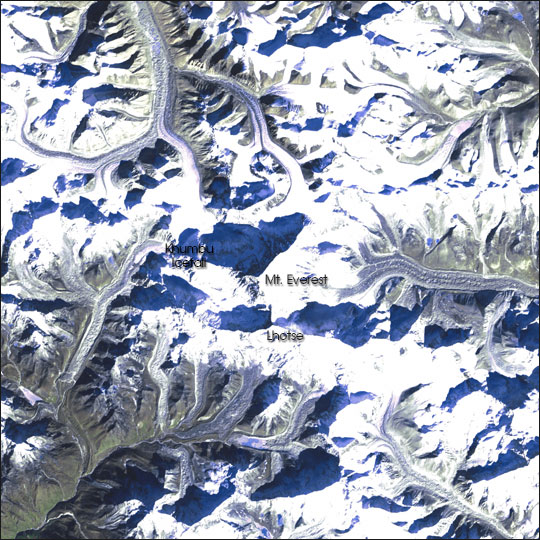 On May 29, 1953, Edmund Hillary, from New Zealand, and Tenzing Norgay, from Nepal, became the first humans to successfully climb to the peak of Mt. Everest, the tallest mountain in the world. They were part of a British expedition lead by Colonel John Hunt sent specifically to reach what was regarded at the time as the “third pole.” In decades prior, major British expeditions had attempted to be the first to reach the North and South Poles only to come in second place behind the Americans (Robert Peary’s expedition to the North Pole) and the Norwegians (Roald Amundsen’s expedition to the South Pole). The British made seven attempts to scale Mt. Everest in the previous decades, usually on the North Face from Tibet. But following the Chinese Revolution in 1949, this route to the mountain was closed and so Mt. Everest expeditions had to explore new routes to reach the peak.

The 1953 British Expedition climbed up onto the South Col and then along the Southeast Ridge by a route which is now the most heavily used by the thousands of climbers who have attempted to climb the mountain since. At the time, there were some doubts whether this approach was possible. At 29,035 feet (8,848 m) in altitude, the air is only one-third as thick as the air at sea level. Members of the expedition, as they did in previous attempts, carried bottled oxygen, but this made for a very heavy load on the climbers and could only supplement their oxygen needs, not fully meet them.

Since 1953, many successful expeditions have climbed Mt. Everest, including the first American expedition in 1963. The local people, known as sherpas, have seen major economic benefits from the heavy traffic in outdoor expeditions and tourists who visit the Sagarmantha National Park at the mountain’s base in Nepal. However, most climbers fail to make the peak, and many people die each year in the attempt. Storms can develop rapidly on the mountain’s top and with little warning, trapping climbers. The climbing season on the mountain is also quite short: in mid-May, a seasonal change in the jet stream causes winds to subside on the peak to a low enough level that it is possible to reach the peak. But at the height of the monsoon season, winds on Everest’s peak may well top 100 mph (160 km per hour) and create total whiteout conditions that would make climbing impossible for anyone foolish enough to try.

In the 50 years since Hillary and Norgay first climbed the mountain, more than 5,000 people have attempted to repeat their feat with only 1,600 successes and 175 fatalities.

Everest is the tallest of many extraordinarily high peaks in the Himalayas, including neighboring Lhotse (27,890 feet, 8516 m) and Nuptse (25,790 feet, 7885 m). The mountain range was formed when a large land mass broke off from Africa roughly 200 million years ago and was carried by plate tectonics across what is now the Indian Ocean. When this land mass came close to Asia, it started to push up the land ahead of it, forming a large shallow ocean with rich ocean life. The bones and shells of the plants and animals in this shallow ocean formed limestone and left fossils. As the land mass continued to plow north and collide with Asia, the ocean was slowly raised up and drained, eventually being lifted up to form the Himalayan Mountains. The land mass, which is still moving north and forcing the land ahead of it upwards, is known as the Indian subcontinent. The presence of limestone and ocean marine fossils at the top of these mountains is one of the key pieces of evidence cited that advanced the idea of plate tectonics (large chunks of the Earth’s surface moving over molten rock in the Earth’s core) when it was first proposed as a theory in 1915.

This image was acquired by Landsat 7’s Enhanced Thematic Mapper plus (ETM+) sensor on January 5, 2002. It is a natural color image, though it has been enhanced by including some near-infrared wavelength observations in the green channel to emphasize vegetation, as well as being sharpened with the sensor’s panchromatic band.