Sizzling First Images from NASA’s “Thermometer in the Sky” 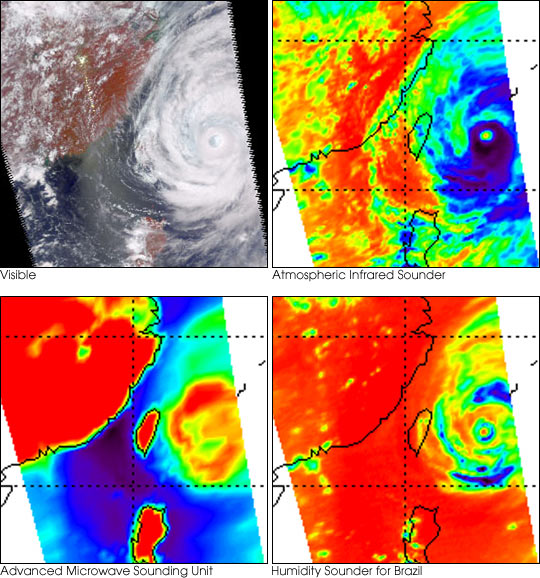 These four images of Tropical Cyclone Ramasun were obtained July 3, 2002, by the Atmospheric Infrared Sounder (AIRS) experiment system onboard NASA’s Aqua spacecraft. The AIRS experiment, with its wide spectral coverage in four diverse bands, provides the ability to penetrate clouds and obtain complete “3-D” observations of severe weather from the surface of our planet to the top of the atmosphere with unprecedented accuracy. Such accuracy is the key to understanding weather patterns and improving weather predictions.

Viewed separately, none of these images can provide accurate 3-D descriptions of the state of the atmosphere because of interference from clouds. However, the ability to make simultaneous observations at a wide range of wavelengths allows the AIRS experiment to “see” through clouds.

The visible light picture from the AIRS instrument (upper left) provides important information about the location of the cyclone, cloud structure and distribution. The AIRS instrument image at 11 micrometers (upper right) is from a 10 micron transparent “window channel” on the instrument that is little affected by water vapor but still cannot see through clouds. In clear areas, such as in the central pixel in the eye of the cyclone, it measures a surface temperature of about 300 degrees Kelvin (colored red). In cloudy areas it measures the cloud top temperature, which for the cyclone is about 200 degrees Kelvin, corresponding to a cloud top height of about 50,000 feet.

On the other hand, most clouds are relatively transparent to microwave radiation, and the Advanced Microwave Sounding Unit image (lower left) can see through all but the densest clouds. For example, Taiwan, which is covered by clouds, is clearly visible.

The Humidity Sounder for Brazil instrument channel (lower right), also in the microwave, is more sensitive to both clouds and humidity. Only in clear, dry regions does it see the surface. It is also severely affected by suspended ice particles formed by strong convection, which causes scattering and appears extremely cold in the image. The blue areas indicate intense precipitation.